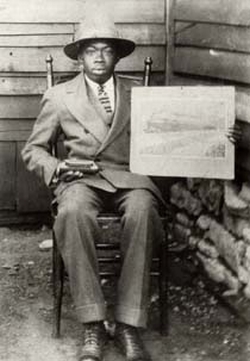 Country music pioneer DeFord Bailey was born in 1899 in Carthage, Tennessee. Stricken with infantile paralysis at the age of three, he was given a harmonica as a means of amusement. Bailey overcame polio, but he never grew taller than four feet, ten inches. However, his skill with the harmonica and his musical talent gained Bailey renown in the emerging genre of country music.

During his youth, Bailey composed harmonica tunes based on the sound of rushing locomotives. By the time he was a teenager, a white storekeeper hired him to entertain customers with his harmonica. He later moved to Nashville where he continued playing the harmonica for street audiences.

On December 6, 1925, Bailey won second place in a French harp (harmonica) contest on WDAD Radio in Nashville. He played his rendition of “It Ain’t Gonna Rain No More.” Bailey made his first appearance on Nashville’s WSM Radio, after overcoming some racial opposition from the station’s director. Twenty-six year-old Bailey was given the title “Harmonica Wizard.”

In April 1927, Bailey recorded eight titles for the Brunswick label in New York. On October 2, 1928, he recorded for Victor Records during a Nashville session. “Ice Water Blues/Davidson County Blues” became so popular that the Victor label released it three times.

DeFord Bailey toured the South with the leading stars of the Grand Ole Opry in the 1930s, including Roy Acuff, Uncle Dave Macon, and Bill Monroe. He was well received by the country music fans, but racial segregation laws caused problems in hotels and restaurants. To get a hotel room he often had to pose as a baggage handler for the white performers.

Bailey’s popularity peaked in the late 1930s. During one three-hour Grand Ole Opry show, he was allowed a notable twenty-five-minute performance. By 1941, however, he was off the Opry. For the next thirty years, he shined shoes at his small shop in Nashville. He reemerged as a performer in the mid-1960s, playing on local television. In 1965, he made a rare concert appearance at Vanderbilt University. By the 1970s, he had returned to the Grand Ole Opry and even celebrated his seventy-fifth birthday at the auditorium on December 14, 1974. His last performance at the Grand Ole Opry House was on on April 3, 1982.

DeFord Bailey died in Nashville at the age of 82 on July 2, 1982. On June 23, 1983, the country music industry celebrated DeFord Bailey as the first African-American star of the Grand Ole Opry. The mayor unveiled a plaque in Bailey’s honor, and a monument was placed at his grave site in Nashville’s Greenwood Cemetery. Bailey’s memorabilia was presented to the Country Music Hall of Fame and Museum.