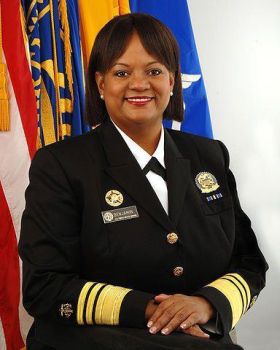 Dr. Regina Marcia Benjamin, President Barack Obama’s nominee for Surgeon General of the United States, is an accomplished physician whose professional and personal  roots are planted deeply in rural America. Dr. Benjamin was nominated for the post by the President on July 13, 2009 and unanimously confirmed by the U.S. Senate on October 29, 2009.

Dr. Benjamin was born in Mobile, Alabama in 1956 and grew up in nearby Daphne, Alabama.

Regina Benjamin’s parents divorced when she was a child and her mother worked as a domestic and waitress to support Regina and her older brother.  Although the family owned land, financial necessity forced them to sell it.   She recalled that her family often fished in the Gulf of Mexico to catch their evening meal.

Despite her family’s poverty Regina Benjamin set her sights on college.  She enrolled in Xavier University in New Orleans, Louisiana where she met an African American physician for the first time.  This encounter persuaded her to pursue a career in medicine.  Earning a Bachelor of Science degree from Xavier in 1978, she then attended Morehouse School of Medicine in Atlanta, Georgia between 1980 and 1982 but completed her medical degree at the University of Alabama, Birmingham.

Dr. Benjamin helped defray her educational expenses by joining the National Health Service Corps (NHSC) which reimbursed her tuition in exchange for a three-year commitment to practice in a medically underserved community.  After residency in central Georgia, she in 1987 settled in Bayou La Batre, Alabama, a shrimping town of 2,500 along Alabama’s Gulf Coast near Daphne.  She became the only doctor serving the small, impoverished community there.

After fulfilling her three-year obligation to the NHSC, Dr. Benjamin remained in Bayou La Batre.  In 1990 she opened her own family practice, enrolled at Tulane University’s School of Business where she earned an MBA, and converted her practice into the Bayou La Batre Health Clinic. When the clinic was destroyed by Hurricanes Georges in 1998 and Katrina in 2005, Dr. Benjamin continued to serve her patients, rebuilding after each storm.

Benjamin’s professional experience is equally impressive.  In 1995 she became the first woman and the first physician under age forty to be elected to the American Medical Association (AMA) Board of Trustees.  She was the sole American recipient of the 1998 Nelson Mandela Award for Health and Human Rights.  In 2002 Dr. Benjamin became the first African American female president of a state medical society when she was elected President of the Medical Association of the State of Alabama (2002-2003).

In September 2008 she was one of 25 recipients of the “genius awards” given by the John D. and Catherine T. MacArthur Foundation.