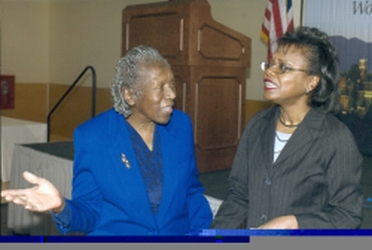 Gladys E. Kidd, educator, nutritionist, mentor, philanthropist, and granddaughter of slaves was born on October 11, 1925 in Columbus, Ohio to Henry Wesley Cooper, a Presbyterian minister and Charlotte Melinda Cooper, a schoolteacher. She attended the all black elementary and middle schools. While in high school, she developed an interest in hospital dietetics. In 1945 Kidd earned her BS from Ohio State University in Dietetics. The following year she continued her studies, enrolling in a graduate program in foods and nutrition at Washington State College (now Washington State University, WSU). Her graduate research focused on the impact the prototype microwave oven had on the nutritional content of frozen peaches. In 1948 Kidd became the first African American woman and person of color to earn a master’s degree from WSU.

Following graduate school, Kidd devoted her career and research to improving health through nutrition and safe food. In 1954 she received a Fulbright Fellowship to Queen Elizabeth College at the University of London. During the 1950s and 1960s she held various positions in her field. Kidd taught at Syracuse University, North Carolina College (now North Carolina Central University), and chaired from 1955-1961 the Home Economics Department at Spelman College in Atlanta. While in academia, she also authored several essays on nutrition. She was married to James Kidd from 1961 to 1963 and worked as a registered dietitian at Grant Hospital in her hometown of Columbus.

In 1966 Kidd returned to WSU as an associate professor of foods and nutrition -in the Department of Foods and Nutrition, and Institute Management. In this position, she conducted research on improving the dietary habits of Africans and African Americans. In the late 1960s Kidd served on a campus committee that developed WSU’s first Black Studies courses. She also created and taught Black Community Health and Nutrition, a Black Studies course. At the age of 43 and single, she adopted Lavern and in 1973 married Clifford Jennings, a media services technician at WSU.

In 1973 Gladys Kidd Jennings began a three year term as interim chair of the Department of Food, Nutrition, and Institute Management. During her years in academia, Jennings authored essays and published research on nutrition issues. She retired from the classroom in 1991, but continued with the institution part-time as a recruiter for students of color for the WSU College of Agricultural, Human, and Natural Resource Sciences. Over the years, her philanthropic and fundraising efforts have contributed to programs including National Organization of Blacks in Dietetic and Nutrition (NOBIDAN) and the Talmadge Anderson Heritage House, WSU’s Black Cultural center. She has assisted hundreds of undergraduate and graduate students at Washington State University in furthering their academic pursuits.

During her career, Jennings has received several professional and service awards and honors. In 1999, she received the NOBIDAN First President’s Award. In 2005, she received the WSU Alumni Achievement Award. For her activism and commitment to Black Studies, the library in the Talmadge Anderson Heritage House was named in her honor. In 2009, Elson S. Floyd, WSU’s first African American president, presented Jennings with WSU’s Women of Distinction Award.

Gladys Kidd Jennings retired from Washington State University in 2008. She resides in Mill Creek, Washington and is a self-employed nutritional consultant.