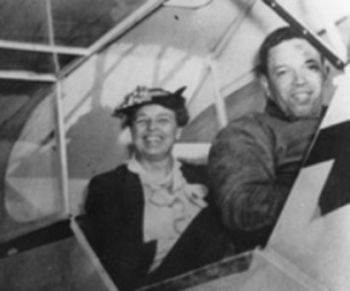 Charles Alfred Anderson, often called the “Father of Black Aviation” because he trained and mentored of hundreds of African American pilots, was born in Bryn Mawr, Pennsylvania, a Philadelphia suburb, on February 9, 1907.  His parents were Janie and Iverson Anderson. Charles Anderson earned the name “Chief” because he was the most experienced African American pilot before coming to Tuskegee Army Air Field (TAAF) in 1940.  He had amassed 3,500 hours of flight which prompted most of his contemporaries and students to call him by that name as a sign of their respect for his accomplishments.  Anderson was also the chief flight instructor for all cadets and flight instructors at Tuskegee, Alabama during World War II.

While growing up in Bryn Mawr, Anderson developed an interest in aviation.  In August 1929, at the age of 22, he borrowed $2,500 from friends and relatives, bought a used airplane, and taught himself to fly.  Later that year he received License No. 7638.  In 1932, Anderson received a commercial pilot’s license and an air-transport pilot license, becoming the first African-American to hold both certificates. In the same year, he wed his childhood sweetheart, Gertrude Elizabeth Nelson. The couple had two sons.

In July 1933, Chief Anderson and Dr. Albert E. Foresythe, an Atlantic City, New Jersey surgeon and Tuskegee Institute graduate, made aviation history when they became the first African-Americans to fly a plane across the United States–from Atlantic City to Los Angeles, California and back. Their two-seat Fairchild 24, which they called The Pride of Atlantic City, had no parachutes, landing lights, radio, or “blind” flying instruments.  The pilots used a road map for navigation.  Anderson and Foresythe were sponsored by the Atlantic City Board of Trade, and they stopped in cities with large African-American populations along the way.  In 1935, they flew a “goodwill” flight to the Caribbean, stopping in the Bahamas, Cuba, Jamaica, and Haiti in their plane named The Spirit of Booker T. Washington.

In 1940, Chief Anderson became the first flight instructor at Tuskegee Institute. Tuskegee’s president, Frederick Patterson, persuaded Anderson to start the Civilian Pilot Training Program, the first at a historically black college. By the end of the year, Anderson had recruited four other pilots for the program, Charles Foxx, Milton P. Crenchaw, Forrest Shelton, and Richard Davis.

On April 19, 1941, First Lady Eleanor Roosevelt visited Tuskegee Institute.  During her visit she asked Chief Anderson if African Americans could really navigate the skies.  Anderson invited her to fly with him.  Mrs. Roosevelt agreed and was flown over Tuskegee.  This short but significant flight is credited with helping to persuade President Franklin Roosevelt to establish military flight training at Tuskegee later that year.  That program produced the famed Tuskegee Airmen during World War II and Anderson was put in charge of their training. Between 1940 and 1946, Anderson and fellow instructors trained nearly 1,000 pilots, bombardiers, navigators, and other flight personnel.

Anderson continued to train civilian pilots After World War II; he promoted aviation and aeronautical education among African Americans the next 50 years.  As a founding member of Negro Airmen International (NAI), for twenty-two years he trained sixteen-to- nineteen-year-old black youths at the NAI’s Summer Flight Academy. By the time of his death, he had amassed over 52,000 flying hours. Charles Alfred “Chief” Anderson died on April 13, 1996 at his home in Tuskegee after a long battle with cancer.