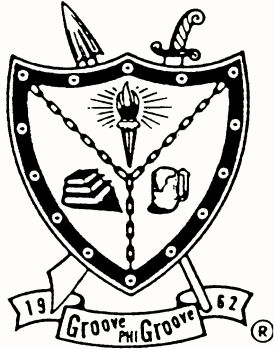 These young men developed alternate ideas, which challenged the principles adopted by older black college fraternities such as Alpha Phi Alpha and Omega Psi Phi.  These ideas changed the way college students think of brotherhood.  Groove Phi Groove saw its purpose as promoting a fellowship among black college men to encourage academic awareness, high ethical standards, and group unity.  They also sought to create intelligent and effective leadership that would find ways to solve social and economic problems not only in African America but to improve the overall status of mankind.  They named their new organization, Groove Phi Groove, because the term groove in the early 1960s meant among young African Americans being smooth, quick, and skillful.  Groove is also associated with positive social exchanges or “fellowshipping” which is why members are called “fellowmen.”

Founded during the era of civil rights protest in the early 1960s, Groove Phi Groove quickly assumed an active role in contributing to the cultural, scholastic, political, service, and social life on campuses across the country.  After the first chapter was formed at Morgan State University, the fellowship quickly spread to other campuses, including Delaware State University, North Carolina Central University, Virginia Union University, and Lincoln University in Pennsylvania.  Grooves also took part in demonstrations and marches in Baltimore and other cities to bring about full racial equality for African Americans.

Today Groove Phi Groove has over a total of over 40,000 members (fellowmen) in over 40 graduate and undergraduate chapters around the United States.  Its most notable members include North Carolina Congressman G.K. Butterfield, Douglass Palmer, the first African-American Mayor of Trenton New Jersey, NBA legend Earl “The Pearl” Monroe, and WWE Hall of Fame wrestler Sylvester “Junk Yard Dog” Ritter.  Its national publication is called the Sword & Spear.

Groove Phi Groove supports a variety of community service and academic outreach programs, including Project Missing Children, the Willie J. Brown Scholarship, the United Negro College Fund (UNCF), and the Boys Scouts of America.  It also has its own scholarship, mentorship, and tutorial programs.