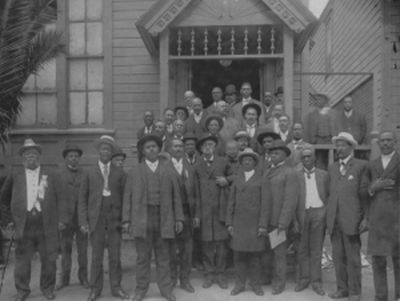 The Afro-American Council (AAC) was established in Rochester, New York, in September 1898 by newspaper editor T. Thomas Fortune and Bishop Alexander Walters of the African Methodist Episcopal Zion Church.  They envisioned the organization as a revival of the earlier National Afro-American League (NAAL), which in 1890 became the first national black organization specifically created to challenge racial segregation and discrimination.  By the mid-1890s the NAAL dissolved as conditions facing Southern African Americans continued to worsen.  The AAC proposed to take up the goals of the defunct NAAL.  Like its predecessor, the AAC opposed lynching, disfranchisement of black voters, and racial discrimination against all African Americans.

The immediate impetus for the AAC was the brutal murder of African American postmaster Frazier B. Baker in Lake City, South Carolina by a white mob.  In response to the incident, Fortune and Walters called for a number of black leaders to meet at Rochester to dedicate a statue of Frederick Douglass, the city’s most prominent African American resident, and to remain there to create the Afro-American Council.

With the inclusion of a broader spectrum of black leaders including journalists, attorneys, educators, politicians and community activists, the AAC was both more representative of the larger black middle class and better positioned to generate funds to support its activities.  Bishop Walters of Washington, D.C., was its first president.  Other officers included Ida B. Wells of Chicago, Illinois as secretary and John C. Dancy of North Carolina as Vice President.  Representative George Henry White of North Carolina, the only black member of Congress at the time, was later a vice president of the organization.  Other prominent members included Mary Church Terrell, W.E.B. DuBois, former Louisiana governor Pinckney B.S. Pinchback, Professor William S. Scarborough, Henry O. Flipper, the first black West Point graduate, and Booker T. Washington, founder of Tuskegee Institute in Alabama.

The AAC was notable in that it was one of the first black organizations to welcome women as equal members.  The organization also was the first black group to meet regularly with a U.S. President.  It met with President William McKinley each year between 1898 and 1901. The AAC lobbied for the passage of a federal anti-lynching law and raised funds to challenge the Louisiana constitution’s “grandfather clause” which effectively eliminated black voting in the state.

Despite its goal of having African America speak with one voice on politics (black Republicans and Democrats joined the AAC), the organization eventually divided into pro- and anti-Booker T. Washington factions.   By 1902 Washington supporters dominated the Council and three years later most of the anti-Washington Council members including DuBois, Wells, Terrell, and Bishop Walters left to form the Niagara Movement.  The AAC held its final meeting in Baltimore, Maryland in 1907.

Although the AAC was torn by factionalism and achieved few successes, it laid the groundwork for independent black political action in an era of racial segregation and helped train some of the nation’s most prominent black activists who would go on to create the National Association for the Advancement of Colored People in 1909.