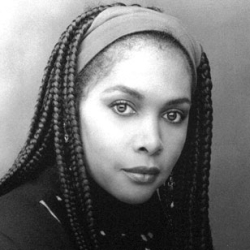 Filmmaker Julie Dash was born on October 22, 1952 in Queens, New York. She received her B.A. in film production from City College of New York in 1974 and went on to earn a two-year fellowship to the Center for Advanced Film Studies at the American Film Institute (AFI) in Los Angeles.  At AFI, Dash studied under filmmaker Jan Kadar and produced Four Women, an experimental dance film that received the 1978 Gold Medal for Women in Film award at the Miami International Film Festival.  Dash continued her graduate studies at the University of California at Los Angeles (UCLA), where she directed Diary of an African Nun, an adaptation of a short story by Alice Walker, in 1977.  In 1985, she earned her M.F.A. in Film & Television production at UCLA.

In 1981, the Guggenheim Foundation awarded Dash a grant to research Gullah culture in the Sea Island communities of South Carolina and Georgia.  Part of her research was included in her 1991 independent film, Daughters of the Dust.  The groundbreaking Pan-African themed and female-centered film depicts a group of Gullah women celebrating their African ancestry.  Daughters of the Dust was the first nationally released feature-length film by an African-American woman, and it won the best cinematography category at the Sundance Film Festival.  The Library of Congress placed the film on its National Film Registry, joining a distinguished group of films preserved as national treasures.

Following the success of Daughters of the Dust, Dash continued to receive awards and honors for her film and television directing.  Dash’s other dramatic films include Love Song, Incognito, and Funny Valentines. She wrote and directed an episode of Women for Showtime, as well as Sax Cantor Riff and HBO’s Subway Stories.  She also directed the CBS television movie, The Rosa Parks Story, featuring Angela Basset. The film received several awards, including the NAACP Image Award, the Family Television Award, and the New York Christopher Award. In 2004, she directed Brothers of the Borderland, a short film for the National Underground Railroad Freedom Center Museum in Cincinnati, Ohio. Recent directing credits include episodes of the OWN network’s Queen Sugar (season two) and Fox network’s Our Kind of People (2021).

Dash is the Diana King Endowed Professor in the Department of Art & Visual Culture at Spelman College in Atlanta, Georgia. Her film company, Geechee Girls, is based in the same city.  In 2007, she received the Lifetime Achievement Award from the Images of Black Women Film Festival.

She is married to Arthur Jafa Fielder, the cinematographer on her first feature, Daughers of the Dust.  They have a daughter named N’Zinga.