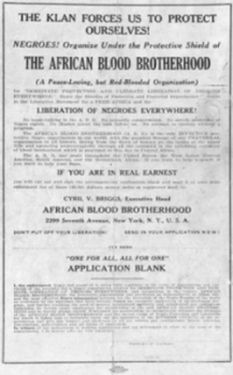 The African Blood Brotherhood for African Liberation and Redemption (ABB) was a militant black liberation group founded in 1919 by West Indian journalist Cyril Briggs. The ABB advocated armed defense against racist assaults and the creation of an independent black socialist commonwealth. It sought to unite black radicals around the issues of racism, colonialism, black nationalism, and anti-capitalism and, through its merger of class and race consciousness, provided the primary gateway for black radicals’ entrance into the Communist movement in the early to mid 1920s.

Centered in Harlem, the ABB established local branches throughout the country. The group operated in semi-secrecy for much of its existence, making estimates of its membership problematic. Although it boasted membership figures in excess of 50,000, in all likelihood the ABB never drew more than 3,500 adherents nationwide. However, especially in Harlem, its membership included some of the most influential black radicals of the period, including Briggs and fellow West Indian immigrants Richard B. Moore and Otto Huiswoud, as well as American-born Grace Campbell. Primarily a propaganda organization, the ABB’s most important platform and recruitment tool was Briggs’ newspaper, the Crusader, which had been founded in 1918. In 1921 the ABB gained notoriety and a boost in membership after its Tulsa, Oklahoma branch was linked to the armed resistance of local blacks during the Tulsa race riot.

Briggs and the ABB increasingly gravitated toward the Communist (Workers) Party in the early 1920s. The shift entailed moderating some of the group’s nationalist militancy in favor of more class-conscious interracial solidarity. Nevertheless, Briggs was able to forge an ideological fusion of black liberation and revolutionary socialism that animated black activists within the Communist Party for years to come and anticipated the Party’s own embrace of “self-determination” for African Americans after 1928. Beset by financial difficulties, the ABB’s formal end came in 1924 when it folded into the Party’s American Negro Labor Congress.