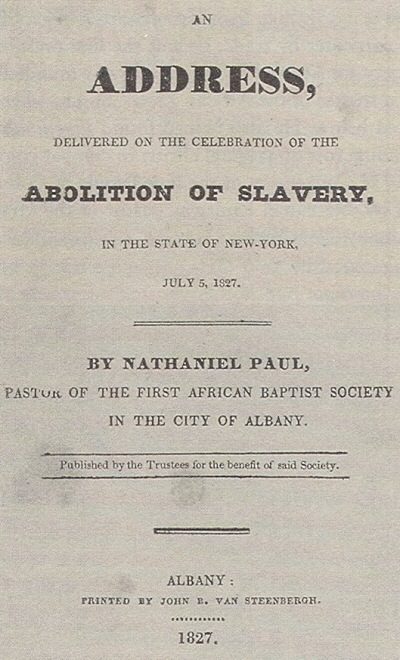 In 1827 Rev. Nathaniel Paul, a minister in Albany, New York, hails the final abolition of slavery in that state.  His address given on July 5, 1827 in Albany marks that occassion.  The address appears below.

We look forward with pleasing anticipation to that period, when it shall no longer be said that in a land of freemen there are men in bondage, but when this foul stain will be entirely erased, and this, worst of evils, will be forever done way. The progress of emancipation, though slow, is nevertheless certain: It is certain, because that God who has made of one blood all nations of men, and who is said to be no respecter of persons, has so decreed; I therefore have no hesitation in declaring this sacred place, that not only throughout the United States of America, but throughout every part of the habitable world where slavery exists, it will be abolished. However great may be the opposition of those who are supported by the traffic, yet slavery will cease. The lordly planter who has his thousands in bondage, may stretch himself upon his couch of ivory, and sneer at the exertions which are made by the humane and benevolent, or he may take his stand upon the floor of Congress, and mock the pitiful generosity of the east or west for daring to meddle with the subject, and attempting to expose its injustice: he may threaten to resist all efforts for a general or a partial emancipation even to a dissolution of the union. But still I declare that slavery will be extinct; a universal and not a partial emancipation must take place; nor is the period far distant. The indefatigable exertions of the philanthropists in England to have it abolished in their West India Islands, the recent revolutions in South America, the catastrope and exchange of power in the Isle of Hayti, the restless disposition of both master and slave in the southern states, the constitution of our government, the effects of literary and moral instruction, the generous feelings of the pious and benevolent, the influence and spread of the holy religion of the cross of Christ, and the irrevocable decrees of Almighty God, all combine their efforts and with united voice declare, that the power of tyranny must be subdued, the captive must be liberated, the oppressed go free, and slavery must revert back to its original chaos of darkness, and forever annihilated from the earth. Did I believe that it would always continue, and that man to the end of time would be permitted with impunity to usurp the same undue authority over his fellow, I would disallow any allegiance or obligation I was under to my fellow creatures, or any submission that I owed to the laws of my country; I would deny the superintending power of divine providence in the affairs of his life; I would ridicule the religion of the Saviour of the world, and treat as the worst of men the ministers of an everlasting gospel; I would consider my Bible as a book of false and delusive fables, and commit it to the flames; nay, I would still go farther; I would at once confess myself an atheist, and deny the existence of a holy God. But slavery will cease, and the equal rights of man will be universally acknowledged. Nor is its tardy progress any argument against its final accomplishment. But do I hear it loudly responded,—this is but a mere wild fanaticism, or at best but the misguided conjecture of an untutored descendant of Africa. Be it so, I confess my ignorance, and bow with due deference to my superiors in understanding; but if in this case I err, the error is not peculiar to myself; if I wander, I wander in a region of light from whose political hemisphere the sun of liberty pours forth his refulgent rays, around which dazzle the star-like countenances of Clarkson, Wilberforce, Pitt, Fox and Grenville, Washington, Adams, Jefferson, Hancock and Franklin; if I err, it is their sentiments that have caused me to stray….We do well to remember, that every act of ours is more or less connected with the general cause of emancipation. Our conduct has an important bearing, not only on those who are yet in bondage in this country, but its influence is extended to the isles of India, and to every part of the world where the abomination of slavery is known. Let us then relieve ourselves from the odious stigma which some have long since cast upon us, that we were incapacitated by the God of nature, for the enjoyment of the rights of freemen, and convince them and the world that although our complexion may differ, yet we have hearts susceptible of feeling; judgment capable of discerning, and prudence sufficient to manage our affairs with discretion, and by example prove ourselves worthy the blessings we enjoy.

Nathaniel Paul, An Address, Delivered on the Celebration of the Abolition of Slavery, in the State of New-York, (Albany: J. B. Van Steenbergh, 1827).