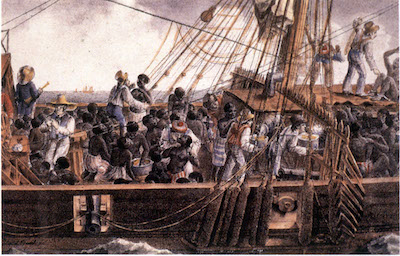 The Tryal Rebellion of 1805 is a little known account of a shipboard slave uprising in the South Pacific off the coast of Chile.  In 1803 a number of West African Muslims were purchased by the Spanish in what is now Senegal and put on a slave ship bound for Buenos Aires in the Spanish colony of Argentina.  After their arrival they were marched across the Argentine pampas and the Andes Mountains to the Chilean port of Valparaiso.  There 72 surviving Africans were placed on another Spanish ship, the Tryal, which intended to take them north to the slave markets of Peru and Ecuador.

Somewhere along that route, Babo and Mori, two leaders of the enslaved Muslims, orchestrated a successful rebellion on board the Tryal in December 1804. They took command of the ship, killing most of the Spanish crew members but holding Captain Benito Cerreno hostage.  For nearly three months the freed Africans sailed the ship in the South Pacific in vain hopes of a return to Senegal.  The vessels leaders were not trained sailors but they had learned the Spanish language during their years of captivity and used their knowledge of the stars to guide the ship southward along the Chilean coast.

In February 1805 the Perseverance, a New England seal hunting vessel commanded by Captain Amaso Delano, encountered the Tryal. Joining it in a sheltered harbor off the coast of Southern Chile, Delano noting that the Tryal’s badly tattered sails signaled extreme distress, boarded the vessel.  He and his crew brought fresh water and food.  He was led to believe that the Africans on board were crew members.  Babo and Mori appeared with Captain Cerreno, refusing to leave his side because, so it appeared, of their devotion to him.  When Captain Delano returned to his vessel, Cerreno broke free, jumped on the deck of the Perseverance, and exposed the deception.  Delano and his crew rushed on board the Tryal and killed most of the Africans.  Babo, the leader was decapitated and his head impaled on a pike.  The surviving Africans were turned over to Spanish authorities.

The Tryal Rebellion became the inspiration for Herman Melville’s 1855 novella Benito Cereno. Although most readers at the time assumed the novella about a slave ship mutiny in the South Pacific was a work of fiction, Melville had in fact developed the plot and the names of the novella’s principal characters from Amaso Delano’s memoirs which were published in 1817.