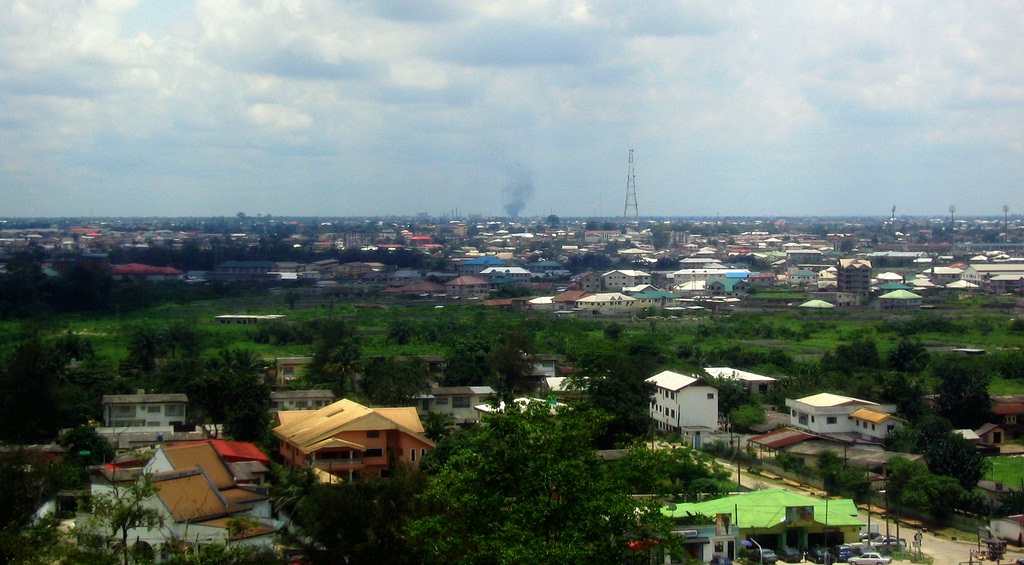 Port Harcourt is the capital, largest city, and port town of Rivers state. It is located in southern Nigeria and is situated along the Bonny River. In 2006 Port Harcourt boasted a population of 1,005,904 people making it the 5th most populous city in Nigeria.

The port was constructed in 1912 by Frederick Lugard, the governor of both the Northern Nigeria Protectorate and the Southern Nigeria Protectorate, and its original purpose was to export coal from the mines near Enugu, Nigeria. The town was formally named Port Harcourt after colonial secretary Lewis Harcourt a year later. Prior to the creation of the port, the area was occupied by the Ijo and Ikwere people but they were forced to give up their land by the colonial government to build the port. During the First World War, Port Harcourt was used as a point of military operations against Central Powers in nearby German Kamerun (now the nation of Cameroon). When crude oil was discovered nearby in 1956, the port became the center of the country’s oil economy. As that industry continued to expand in the post-Nigerian independence era (after 1960), Port Harcourt underwent modernization and expanding urbanization as it became Nigeria’s second largest seaport and the major commercial center in eastern Nigeria. Port Harcourt’s crucial importance was recognized by the Nigerian government when the city was captured by Nigerian army and naval forces on May 19th, 1968 from the Republic of Biafra.

Today, Port Harcourt remains Nigeria’s second largest ports and it is responsible for exporting palm oil, palm kernels, timber, coal, columbite, and petroleum. The city is also the site of storage for palm oil and petroleum. Port Harcourt is a leading industrial center and produces various products ranging from steel to glass bottles and paper. Because of its proximity to the major Nigerian oil producing region, the city is the site of an oil refinery. It has a robust fishing industry that includes boat building and fish freezing facilities.

Port Harcourt is connected to other regions of Nigeria via highways and railways and is the location of an international airport. It is also home to a number of educational institutions including Rivers State University of Science and Technology, Rivers State College of Arts and Science, Ignatius Ajuru University of Education, Catholic Institute of West Africa, Eastern Polytechnic, and the University of Port Harcourt.

The rich culture and history of Port Harcourt can be appreciated in many notable buildings and sites throughout the city. The Port Harcourt Cultural Center is a distinguished tourist attraction that is known for displaying the cultural heritage of not only Port Harcourt but Rivers state as a whole. It houses an auditorium, stage, and theater for live performances of cultural dances. The River State Museum contains numerous works of art and illustrious pieces.