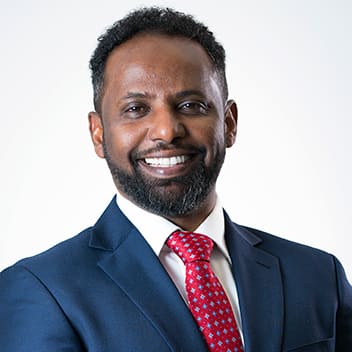 Ibrahim Omer is an Eritrean-born New Zealander politician. He is best known for becoming the first African and second former refugee to become a member of the National Parliament of New Zealand.

Omer was born and raised in Eritrea where he spent much of his early years. He had always envisioned a career in politics but was unable to pursue this interest due to the country’s chaotic and suppressive government. In 2000 22-year-old Omer was recruited to be an Eritrean soldier and was stationed close to the Ethiopian-Eritrean border upon the completion of his training. In 2003 Omer fled Eritrea for Sudan and was accepted as a refugee. While there he worked as an interpreter in United Nations-run refugee camps until he was detained by Sudanese authorities who incorrectly believed he was a spy. The United Nations High Commissioner for Refugees advocated on his behalf and in 2008 he was presented with the opportunity to go to New Zealand.

The start of Omer’s life in New Zealand was characterized by him working multiple jobs in order to support himself and the members of his family who remained in Eritrea. While working as a cleaner in Wellington at Victoria University, Omer was asked to speak on the behalf of other cleaners at a university forum in front of Wellington mayoral candidates. He was later encouraged to pursue a political career and began studying politics and international relations at Victoria College. Omer also became involved in various political organizations including the ChangeMakers Resettlement Forum, the Living Wage Movement, and the New Zealand Labour Party.

In 2020, at the age of 42, Omer became the first African and second former refugee to be elected to the National Parliament of New Zealand. He represented the Labour Party under Prime Minister Jacinda Ardern. Omer’s political interests involve advocating on behalf of low paid workers and former refugees so that they may have increased opportunities for a decent life in their new home nation.