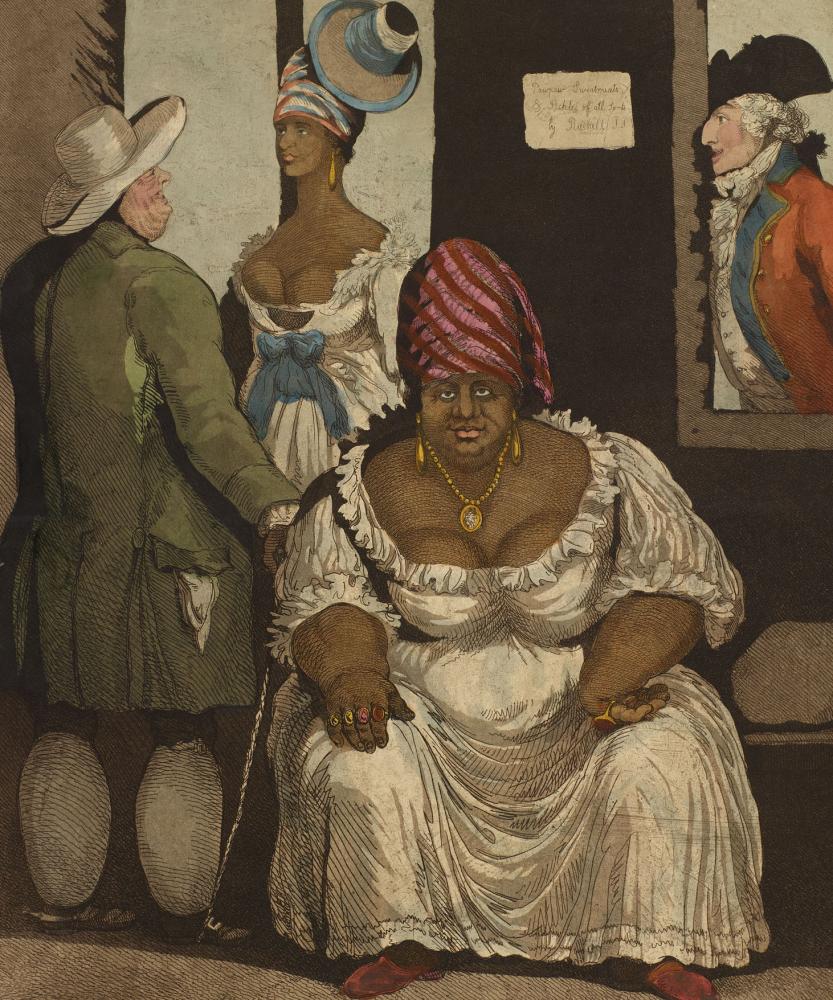 Rachel Pringle Polgreen, a free mulatto woman, became infamous during the 1770s to 1780s, as the first woman of color to own a Hotel-Tavern in Bridgetown, Barbados, based on the (sexual) entertainment of transient British Naval Officers.  Visitors to this hotel included numerous prominent officers and on one occasion, Prince William of England.

Polgreen was born in Barbados in 1753 as Rachel Lauder, the daughter of an enslaved African mother and her owner, William Lauder. Lauder was a Scottish schoolmaster who fled England in disgrace after he had written and published attacks on the English poet John Milton. When Rachel’s father began to make sexual advances on her and she refused him, he became abusive and whipped her. Around the age of 16, however, she was offered a house and her freedom by Captain Thomas Pringle, a Lauder relative, in exchange for sexual favors. Rachel then dropped her Lauder surname and adopted Pringle’s.

After a scandal in which Rachel allegedly faked a pregnancy to establish more influence over Thomas Pringle, he ended his relationship with her and moved to Jamaica. Rachel adopted the name of another prominent white Barbadian, James Polgreen, but there is no evidence of their relationship. In 1780 Rachel Pringle Polgreen opened a tavern on Canary Street in Bridgetown.

White males in Barbados, Creoles, migrants from Great Britain, and British Naval and Military officers were regularly involved in interracial sexual relations on the island. Polgreen’s hotel, essentially a brothel, offered sexual pleasures to sailors in the British Royal Navy.  It acquired its officially sounding name from an alleged encounter with British Royalty. Prince William Henry, Duke of Clarence, who in 1830 at the age of 64 became King William IV, of England, enjoyed spending time at the hotel in the 1790s. During his second visit to the island, it is reported that the Prince, along with his 49th Regiment, came to Polgreen’s hotel and destroyed it in a drunken rage. The next morning, Rachel sent the Prince a bill for the damages, and he sent her payment that was enough to refurbish her hotel more lavishly and extravagant than before. The Royal Navy Hotel remained standing until it was burned down in 1821.

The Royal Navy Hotel prospered.  By the 1790s, Bridgetown’s tax records list Polgreen as the owner of a residence, two smaller houses, five tenements, and two other homes on the island.

Rachel Pringle Polgreen died on July 23, 1791, at the young age of 38. At the time of her death, she owned not only real estate but at least 19 slaves. Her will, made out just two days before her death, provided for the manumission of six of her slaves, while others were bequeathed to those she freed.

The accompanying hand-colored image of Polgreen painted by English artist Thomas Rowlandson in 1796 is now in the Royal Trust Collection of Queen Elizabeth II.