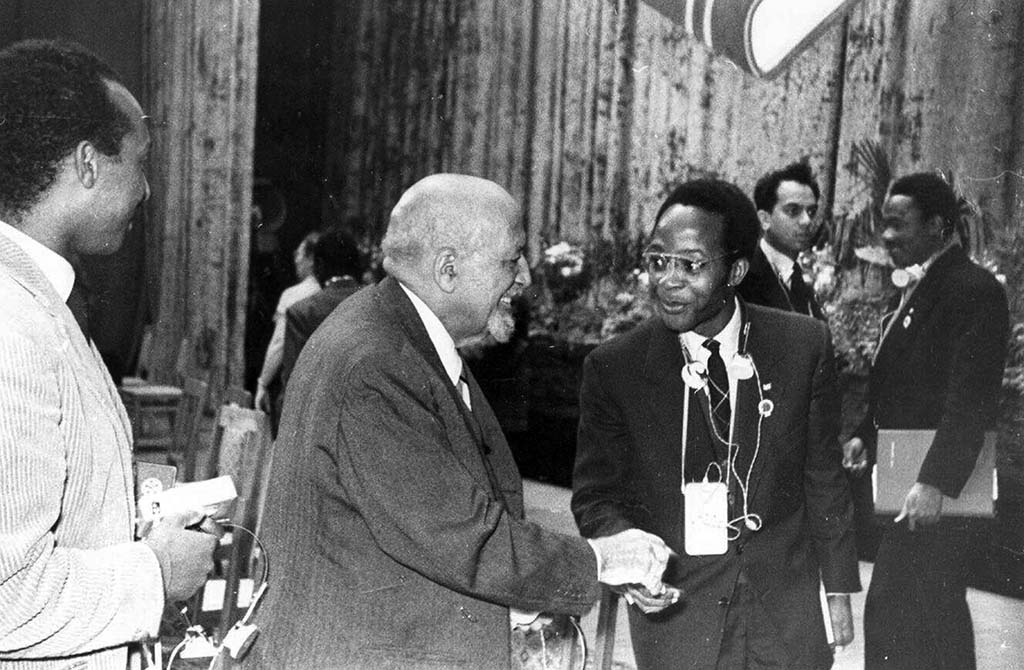 The Afro–Asian Writers’ Conferences were a series of gatherings of literary figures from Asia and Africa that took place over two decades to denounce imperialism and to establish cultural contacts among their countries. The first conference (and by far the best known) was held in October 1958 in Tashkent, the capital of Uzbekistan (at that time the Uzbek SSR, part of the Soviet Union). That conference featured 140 writers from 36 countries. Subsequent conferences convened in Cairo, Egypt, in February 1962, in Beirut, Lebanon, in March 1967, in New Delhi, India, in November 1970, in Almaty, Kazakhstan (at that time the Kazakh SSR, part of the Soviet Union), in September 1973, and in Luanda, Angola, in June 1979.

The Afro–Asian Writers’ Conferences were inspired by the 1955 Asian–African Conference, that met in April 1955 in Bandung, Indonesia. Although the Bandung Conference did not establish any permanent body, it did lead to subsequent gatherings, generally with lower-ranking representatives. The meeting in Cairo in December 1957–January 1958 established the Afro–Asian People’s Solidarity Organization (AAPSO) with a permanent secretariat in the Egyptian capital.  The AAPSO organized the first Afro–Asian Writers’ Conference, which in turn formed a permanent Afro–Asian Writers’ Bureau in Colombo, Ceylon (now Sri Lanka). The Bureau published one journal in English under the title The Call in the early 1960s and another in English, French, and Arabic under the title Lotus from the late 1960s into the 1990s.

The Afro–Asian Writers’ Conferences promoted translation to help Asian and African authors reach larger audiences and planned speaking tours for writers to travel throughout the region. In addition to providing a forum for sharing literary works, the conferences also served as a venue for political discussion. Some authors were able to use these platforms to raise their own political profiles. For example, the Chinese poet Guo Moruo, who held several important positions within the Chinese Communist Party, used the cachet he gained from participating in the initial Afro–Asian Writers’ Conferences to become an important diplomat who played a part in Chinese overtures to many Asian and African countries.

The original Bandung Conference had not involved the participation of the Soviet Union. Consequently, many Conference delegates from pro-American countries criticized Moscow. The Afro–Asian Writers’ Conferences, however, generally promoted viewpoints that aligned with Soviet priorities. Some delegates to the October 1958 Afro–Asian Writers’ Conference in Tashkent reported that they had been cut off from ordinary residents of the city, given special tours, and plied with Soviet propaganda. Thereafter, Western observers tended to dismiss both the literary and political impacts of the conferences.

Conference organizers did, however, insist that African and Asian writers should learn from Western cultural and literary traditions. In the words of one unnamed Soviet poet, it was imperative that African and Asian conference delegates “not confuse colonialism with culture, nor Dreiser with Dulles.” Conference organizers sometimes tried to emphasize their inclusive view of the West by inviting African Americans to join the proceedings. In particular, W.E.B. DuBois, who regretted that he had been unable to attend the Bandung Conference during the period when his passport was confiscated, enthusiastically attended the Afro–Asian Writers’ Conference in Tashkent, where he was greeted with a standing ovation from the other delegates. DuBois, in an illustration of the extent to which the writers’ conferences focused on politics rather than culture, used his opportunity to speak in Tashkent to exhort African leaders not to borrow capital or buy imported goods from the West.