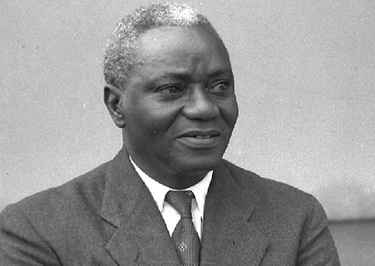 Joseph Kwame Kyeretwei Boakye Danquah (Dankwa) was a Ghanaian lawyer, politician, and leader in that nation’s independence movement. He was born on December 18, 1895, to Emmanuel Yao Boakye and Lydia Okom Korantemaa in the town of Bepong in the Eastern Region of the Gold Coast (Ghana), then a colony of Great Britain.

Upon completion of Senior Secondary School at Begoro, he began working as a clerk for Vidal J. Buckle, a barrister-at-law in Accra, the capital city. In 1914, after passing his Civil Service Examination, Danquah became a clerk at the Supreme Court. His brother, Nana Sir Ofori Atta I, later sent him to Britain in 1921 to continue his studies.

Danquah entered the University of London in 1922 as a philosophy student and graduated in 1925.  He continued graduate studies there and in 1927 became the first West African to obtain the doctor of philosophy degree from a British University. He also passed the British Bar in 1926. While pursuing his studies, Danquah also edited the West African Students’ Union (WASU) magazine and eventually becoming the Union’s president.

Upon his return to the Gold Coast in 1927, Danquah established a private law practice. In 1929, he helped J. E. Casely Hayford found the Gold Coast Youth Conference (GCYC) and served as its secretary general from 1937 to 1947. In 1931, he founded the Times of West Africa, the first daily newspaper in Ghana which he published between 1931 and 1935. A column titled “Women’s Corner” was written by Mabel Dove who later became his first wife in 1933.

Actively seeking measures that would increase the self-government of the Gold Coast, Danquah in 1947 cofounded the United Gold Coast Convention (UGCC), the first political party in the colony. The UGCC, which was composed mainly of the colony’s African elite, demanded constitutional reforms including eventual Independence. Kwame Nkrumah, a U.S. and British educated activist, was invited to be the party’s general secretary.  The UGCC split, however, in 1949 when Nkrumah formed the Convention People’s Party (CPP) which had much broader popular support.

Danquah was elected to the Colonial Legislative Assembly in 1951 but lost his seat in 1954.  By this time he led the more conservative faction of independence proponents.  After Ghana became independent in 1957, he ran against Nkrumah in the 1960 presidential election. Following his defeat, he became the major political opponent of the new government.

Danquah’s continuous opposition to Nkrumah’s government led to his arrest twice, first in 1961 when he remained in detention for a year.  After his release, he was elected the President of the Ghana Bar Association, a position from which he continued to voice opposition to Nkrumah. Danquah was arrested again in 1964 for allegedly plotting against the government. He died in prison on February 4, 1965, at the age of 69.

After Nkrumah’s government was overthrown in a coup in February 1966, the new government gave Danquah a national funeral. In 2008, the Danquah Institute was founded in Accra, to remember and promote the ideas of this early Ghanaian independence leader.