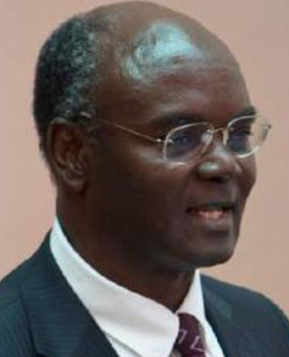 Joseph Wafula Sitati, petroleum manager and the first man of black African descent to become a member of the First Quorum of the Seventy in the Church of Jesus Christ of Latter-day Saints, was born in Bungoma, Kenya, on May 16, 1952. His parents were Nathan Barasa and Lenah Naliaka Mwasame Sitati, both peasant farmers. Joseph Sitati grew up in Nairobi, Kenya, and was raised Quaker. He found that faith to be overtly political, however, and not focused on spirituality. This sentiment changed when he heard his first Mormon sermon from a visiting LDS general authority in 1985. The sermon moved Sitati, and he was baptized in the LDS Church in March of 1986.

While Sitati embraced Mormonism, the Kenyan government, wary of Western religions, did not recognize the LDS Church as an approved faith. The government also limited assembly of all non-recognized religions to nine people. Sitati maneuvered around the assembly law by organizing nine-person groups overseen by a qualified LDS presiding officer. Still, there was significant difficulty in retaining members and gaining new ones. Sitati’s high educational and professional profile, however, helped reverse Kenyan governmental policy.

Sitati attended the University of Nairobi and earned a bachelor’s degree in mechanical engineering in 1975. He also received a diploma in accounting and finance from the Association of Certified Accountants. His education and training enabled him to gain a position with Total, one of the world’s largest petroleum corporations. At Total, he served in multiple positions, including strategy manager and consultant. Sitati used his corporate position to gain an audience with Kenyan president, Daniel Arap Moi. The two met privately in 1991, and soon after the LDS Church was recognized by the government and could purchase property for meeting houses. Sitati offered the dedication prayer in October 1991 in Nairobi, officially proclaiming Kenyan Mormons under the aegis of the LDS Church.

In 2009 Sitati was summoned to be a member of the LDS First Quorum of the Seventy. He was the first black African to achieve this position which entailed serving as a general authority of the LDS Church throughout the world, working directly under the Quorum of the Twelve Apostles, and sometimes giving sermons at the LDS General Convention. Since the lifting of the black priesthood ban in 1978, Mormon members grew exponentially in sub-Saharan Africa, and Sitati became the leader and spokesperson for the faith throughout the continent. Prior to becoming part of the First Quorum, Sitati served as stake president in Nairobi (a stake being comprised of seven to ten “wards” or congregations), an Area Seventy (church official for Africa) director of public affairs for Africa, and president of the Nigeria Calabar Mission.

In 1992 Sitati and his wife, Gladys Nang’oni Nassiuma, were sealed (an LDS rite where the couple are married in both earth and heaven) in Johannesburg, South Africa. They had been married but not sealed since 1976. They have five children together. As of 2015, Sitati remained in the First Quorum of the Seventy, served on the Perpetual Education Fund Committee, and was an assistant in the Priesthood Department in Salt Lake City, Utah.