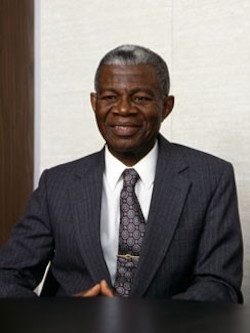 Helvécio Martins, accountant, teacher, and the first black general authority in the Church of Jesus Christ of Latter-Day Saints (LDS), was born in Rio de Janeiro, Brazil, on July 27, 1930. His father, Honório Martins, was a trader of animal hides and later an office worker for the mayor of Rio. Benedita Martins, Helvécio’s mother, was a homemaker. Honório and Benedita had seven children; Helvécio was the oldest. Martins believed that his ancestors were slaves who worked on the sugar plantations north of Rio.

Helvécio grew up in the outskirts of Rio where his father’s success as a hide trader enabled a middle class upbringing. This living situation changed with the numerous labor and economic reforms of Brazilian president, Getúlio Vargas, which decimated Honório’s business. Helvécio dropped out of school at the age of twelve in order to work and supplement the family income.

On December 8, 1956, Helvécio married Rudá Torinho Assis. The couple had four children. Martins later earned his bachelor’s degree in economics in 1962 and obtained an accounting position with the state-owned oil company, Petrobras. By 1972, Martins was the head of finances for Liderbras, a subsidiary of Petrobras.

Martins’s first encountered LDS missionaries in 1972 when they visited his home. Though married in a Catholic ceremony, Helvécio practiced Macumba (a religion based on Western African beliefs and ceremonies) which was also Rudá’s faith. He and Rudá welcomed the missionaries inside and conversed with them for over four-and-a-half hours. The missionaries explained the ban on black males in the priesthood, but that did not dissuade him from joining the LDS Church. Martins, Rudá, and their eldest son, Marcus, were baptized on June 2, 1972.

Despite Martins’s peace with the ban on men of African descent in the LDS priesthood, church leaders were already aware of its implications in Brazil where so many people were partly of African ancestry. Future LDS president, Spencer W. Kimball, first visited Brazil in 1959, and, in subsequent trips, he interacted with several faithful but ineligible potential priests including Martins. At least one historian has argued that Kimball’s removal of the ban on black male priests on June 8, 1978 owed, in part, to the racial realities of countries like Brazil and to stalwart Mormons like Martins.

When the ban was rescinded, Martins was soon ordained a priest and served in various positions, including ward bishop of Tijuca, a neighborhood in Rio, and mission president in Fortaleza, the capital of the northeastern state of Ceará. In 1990 at the age of fifty-nine, Martins was called to serve in the Second Quorum of the Seventy. This position made Martins the first LDS general authority of the African descent. In this position, Martins presided over administrative and ecclesiastical duties of the church directly under the Quorum of the Twelve Apostles and the president of the LDS Church. After he served the requisite five years, Martins continued his active membership in the church and also went to law school, graduating at the age of seventy-five. He passed away on May 14, 2005, in São Paulo of heart failure, only months after completing his studies.