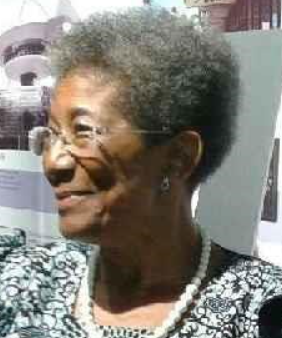 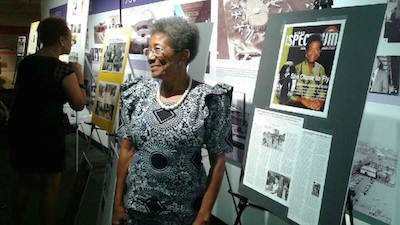 Leopoldine Emma Doualla-Bell Smith is the world’s first black flight attendant. Smith was born in Cameroon which, at the time, France controlled. Smith was a princess of the royal Douala family of Cameroon. She was offered a rare after-school employment opportunity in her hometown of Douala, then the capital of the colony, to serve as a ground hostess for Union Aeromaritime de Transport (UAT), the airline that served France’s African routes.

After her graduation from high school in 1956 at the age of seventeen, Smith was sent to Paris for additional ground hostess training by Air France and then moved to UAT for flight training. In 1957 Smith began flying as a stewardess with UAT which would later merge to become part of Union de Transports Aeriens (UTA). Smith, at the time, didn’t know that she was making history as the first black person to serve as a flight attendant for any airline. She took to the air the year prior to Ruth Carol Taylor who is credited with being the first black flight attendant in the United States. Taylor’s initial flight took place on February 11, 1958, on a Mohawk Airlines flight from Ithaca, New York, to New York City.

In 1960 Smith was invited to join Air Afrique, the airline created to serve eleven newly independent French-speaking nations that were former colonies of France. Smith was the only qualified African in French aviation; her employment identification card was No. 001. She was eventually promoted to an Air Afrique first cabin chief. During her time as a flight attendant, Smith flew throughout Africa and as far away as Australia. Because of the color of her skin, some white passengers treated her like an outcast, but dark-skinned passengers often welcomed her presence. Smith experienced frequent sexual harassment; on one occasion, she slapped a white man who had touched her breast.

In 1969 after twelve years as a flight attendant, Smith left Air Afrique to become manager of Reunited Transport Leaders Travel Agency in Libreville, Gabon. Six years later, she relocated to Washington D.C. to study English at Georgetown University where she also met her American husband, Leroy Smith. Smith returned to Gabon in 1976 where she was hired by Air Zaire as station and officer manager at the Libreville airport. Smith also supported the Skal club (also known as Skal international), the international association of professionals, leaders, and friends who were seeking to promote travel and tourism in Africa.

Smith and her husband moved to Lima, Peru, in 1983 for a Peace Corps assignment. While there, she remained in the travel industry and worked as a travel consultant. Smith and her husband retired in 2003 and moved to Denver where they established the Business and Intercultural Services for Educational Travel and Associated Learning (BISETAL) which encourages on-site education about Africa and other non-western cultures. Smith also volunteers at Denver International Airport through their ambassador program, welcoming visitors to the Mile-High City and assisting them to find their way through the airport. In 2015 Smith was honored at the fortieth anniversary of the Black Flight Attendants of America organization at Los Angeles International Airport’s Flight Path Museum.