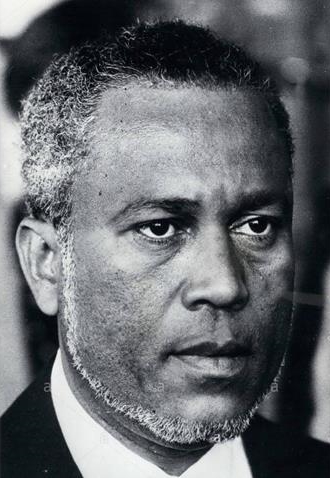 The first president of independent Guinea Bissau was Luis Severino de Almeida Cabral who was born on April 10, 1933, in the city of Bissau in what was then Portuguese Guinea. His parents were from the Portuguese colony of Cape Verde which consisted of several islands in the Atlantic Ocean west of Portuguese Guinea. His parents were of mixed African and European origins. Luis was sent to Cape Verde to attend primary school. After high school, he received training in accounting and was employed by a Portuguese company in Bissau city.

In 1956 Luis Cabral, his half-brother, Amilcar, and four others founded the African Party for the Independence of Guinea and Cape Verde (PAIGC). Amilcar headed the new party. He was a noted intellectual, author, and Pan-Africanist. Amilcar, Luis, and other PAIGC members helped organize a dock worker’s strike in 1959. The strike was brutally and violently suppressed by Portuguese authorities; at least 50 workers were killed. This event caused the Cabral brothers and PAIGC to reconsider their commitment to non-violence. An armed rebellion against Portuguese rule was announced by PAIGC in January of 1963 initiating a fierce guerrilla war that lasted for over a decade.

Following the Carnation Revolution in April 1974 in Lisbon, the new left-wing revolutionary government of Portugal granted independence to Portuguese Guinea which renamed itself Guinea-Bissau, on September 10 of that same year. Luis Cabral became President of the new country.

Under Cabral’s government access to education and health improved dramatically in the impoverished nation. Socialist concepts guided the government and Guinea Bissau received substantial aid from the Soviet Union and its allies including China and other countries in northern Europe. Under Cabral, Guinea Bissau was an authoritarian, one-party state. Cabral was accused of having many Guineans who fought alongside the Portuguese against PAIGC guerrillas executed, although he always denied this accusation.

Within PAIGC animosity developed between those of Cape Verdean background and those with mainland roots. Cabral, of Cape Verdean origin but born in Bissau, did not escape this criticism. Alleging dominance of the party and state by Cape Verdeans, the Prime Minister and former armed forces commander, Joao Bernard Vieira, organized a coup. On November 14, 1980, the Cabral-led government was overthrown and Luis Cabral was arrested and detained for 13 months. He was then allowed to go into exile in Cuba.

Cabral spent several years in Cuba before moving to Portugal in 1984. In 1999 he was allowed to return to Guinea Bissau after Vieira had been ousted from power. Cabral died in Torres Vedras, Portugal on May 30, 2009, after a long illness.

Cabral was married to Lucete Cabral. Little else is known about his family.