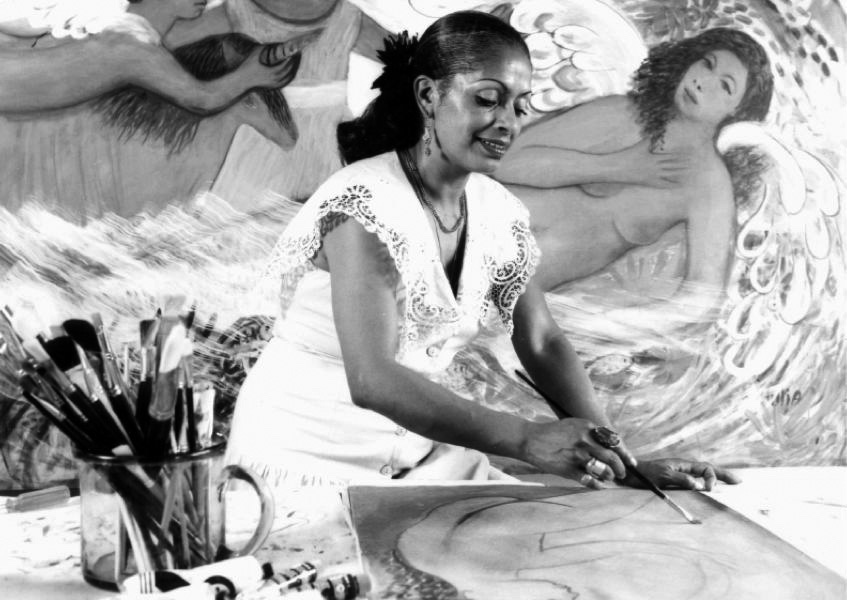 Julia López is an established painter whose work is considered an early example of the “breakaway” generation of painters who began to move away from the muralista artistic tradition in Mexico.

López was born in the Costa Chica region in the state of Guerrero on January 1, 1936. Her parents were of African and Amuzgo (indigenous) heritage and López was one of eight daughters born to the farming family. Julia López was the mother of three daughters and had a long-term love affair with the painter Rafael Coronel, whose son López also helped raise. As of this writing, López’s work hangs in more than forty museums and galleries, but the majority is held in private collections. Since the mid-1950s, López has held more than thirty solo exhibits in Latin America, the United States, and in Europe.

Julia López was a rebellious young girl. She wanted more than her small village could provide, so she began to plot her escape against the wishes of her mother. At 13, she ran away from home to the nearest city, Acapulco, where she began working in a restaurant. Her family found her and brought López back home, but by 16 she was headed to Mexico City to begin her life as a domestic worker.

López’s dark skin and good looks attracted the attention of a wealthy woman who worked in the fashion industry. López began modeling and was soon introduced to Frida Kahlo. Kahlo encouraged López’s modeling work and provided the young woman with an introduction to the head of the Escuela Nacional de Pintura (National School of Painting). López became a model for some of the most well-known artists working at the time, including Diego Rivera. As her modeling career took off, López began to teach herself to paint. Modeling was her pathway into the very cosmopolitan world of Mexican artists during the fifties and sixties. López asked her mentors to formally teach her how to paint in exchange for her modeling work, but they refused as they did not want her style to lose its spontaneity.

López’s paintings often feature dark-skinned women in bright colors with tropical settings. She describes how so much of her work is influenced by the places and people of her childhood. Her paintings are nostalgia. Her partner of many years, Rafael Coronel, described Kahlo as a painter of tragedy and López as a painter of paradise. Today Julia López lives and works in Mexico City.