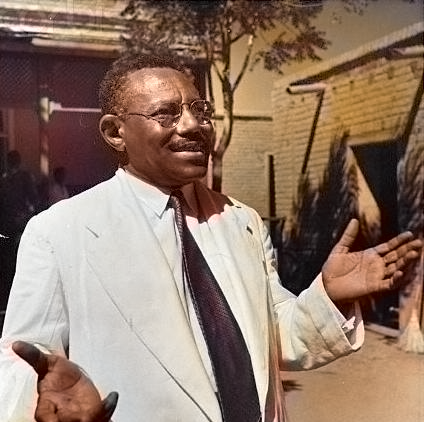 Ismail Al-Azhari was the first Prime Minister of independent Sudan from 1954 to 1956 and, also, served as President of Sudan from 1965 to 1969. Al-Azhari was born in Omdurman, Anglo-Egyptian Sudan on October 26, 1900. Anglo-Egyptian Sudan was a condominium, created by agreements concluded in 1899 between Great Britain and Egypt under which the two countries jointly administered this vast territory. As a youngster, Al-Azhari attended local schools in Omdurman and Khartoum. After completing secondary school, he attended Gordon Memorial College in Khartoum which opened in 1902 and soon began to produce a Western-educated elite that was gradually drawn away from the traditional political and social framework. He also attended the American University in Beirut for a time. His degree was in mathematics and he initially worked as a secondary school teacher in Sudan.

In 1938 Al-Azhari was elected President of the Graduates General Congress. This was a group of western-educated Sudanese who advocated for greater participation of Sudanese in the colonial administration. In 1943 he helped form the Ashiqqa (Brothers) Party, the first political party organized in Sudan. The party was supported by the Khatmiyya one of the most prominent Sufi Islamic orders in Sudan.

In 1948-49 Al-Azhari was imprisoned by British colonial authorities due to his political activities. Once released he resumed his work with the Ashiqqa Party eventually becoming the party leader. In the 1953 election for the Sudanese parliament and for the constitutional assembly, his party was victorious.

In 1954, Al-Azhari became Prime Minister, heading a government that would write a constitution for Sudan to make progress toward independence. Initially, Al-Azhari advocated a union with Egypt rather than separate independence for Sudan. However, this was not a popular position with most Sudanese. A military mutiny in southern Sudan occurred in August 1955 which was sparked by anger at the possibility of a union with Egypt. The Khatmiyya Brotherhood was also concerned about such a union and voiced this to Al-Azhari. Al-Azhari backtracked on his initial position and endorsed Sudanese independence. On January 1, 1956, Sudan became an independent country headed by Al-Azhari.

Al-Azhari was not a popular leader and having lost the support of the Khatmiyya and within his political, he lost a vote of confidence in the Sudanese parliament. He was forced to resign.

In 1965 Al-Azhari became Chairman of the State Council of the Republic of Sudan. This was an honorary position with little real power. On May 5, 1969, the government of Sudan was overthrown in a military coup led by Gaafar Mohammed el-Nimeiri. Al-Azhari was arrested and held in Cooper Prison in Khartoum. Several months later he was transferred to a hospital due to severe medical issues. He died in the hospital Khartoum General hospital in mid-October, 1969 at the age of 68.

Little is known about Al-Ahzari’s personal life, marriage or children.