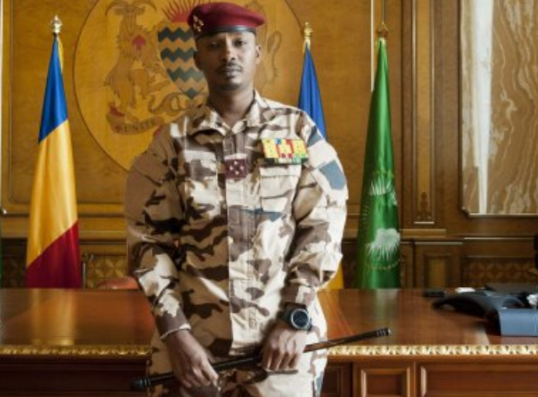 Mahamat Idriss Déby Itno is the Chairman of the Transitional Military Council of Chad (de facto President). Déby is the son of the former President of Chad, Idriss Déby. He was born on April 4, 1984, in the capital city of N’Djamena and is known by the nickname “Kaka” or grandmother in Chadian Arabic, after his paternal grandmother who raised him. He attended local schools in Chad and then joined the national army. A career soldier, Déby is from the Zaghawa ethnic group, which boasts numerous top officers in the army. Déby Itno joined the Joint Grouping of military schools (GEMIA) in Chad before proceeding to the French military school in Aix-en-Provence, France. At GEMIA soldiers are trained in International Humanitarian law, means and methods of warfare, how to distinguish combatants from non-combatants, and the proportionate use of weapons.

In 2006, Déby had his first combat experience when rebels attacked and threatened to overrun N’Djamena. He also participated in combat in eastern Chad where he was promoted to the rank of Major. Déby fought in the Battle of Am Dam where the Chadian Army defeated rebels attempting to overthrow the government.  In 2013 Déby Itno was appointed second in command of Chadian special forces fighting insurgents in Mali. While serving in Mali he fought in the Battles of Ifoghas and Tigharghar against rebels. Déby Into has also served in the Presidential Guard; eventually becoming head of this elite group. At the age of 38, he is currently a 4-star General in the national army.

On April 20, 2021, the army announced that Chad’s President Idriss Déby had died of his injuries following clashes with rebels from the Front for Change and Concorde in the north of the country. According to the Chadian constitution, the President of the National Assembly should assume the presidency. When the President of the National Assembly declined to take the office, a group of military officers took control of the government by establishing a transitional military council consisting of 14 generals who run the government. Mahamat Déby Itno heads the ruling council which has promised to hold free and democratic elections within 18 months.

Mahamat Déby Itno is married to Dahabaye Oumar Souny a prominent, local journalist. Little is known about their children.

https://www.trtworld.com/africa/who-is-mahamat-deby-chad-s-new-leader-46090;  “Biography of the President of the Transitional Military Council”, https://presidence.td/le-president/; “Chad:  Who is Mahamat Idriss Deby, Son of the Late President Idriss Deby Itno?,” https://www.theafricareport.com/81876/chad-who-is-mahamat-idriss-deby-son-of-the-late-president-idriss-deby-itno/ “Chad: ‘My father would be proud of me’ says President Mahamat Deby,” https://www.theafricareport.com/103222/chad-my-father-would-be-proud-of-me-says-president-mahamat-deby/ “Who is Mahamat Deby, Chad’s new leader?,”