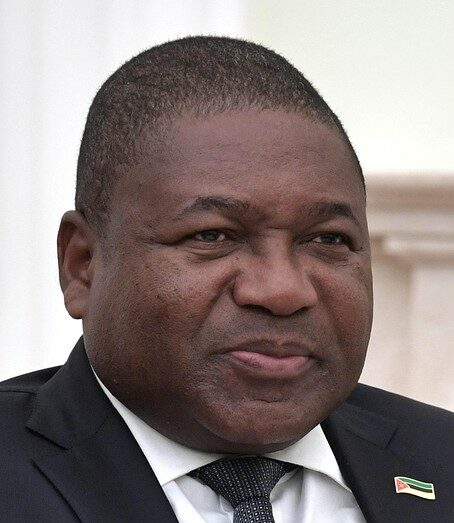 At the start of the Mozambiquan War for Independence Nyusi was taken across the border to attend a FREMLIO school in Tunduru, Tanzania. He attended FRELIMO secondary schools in Mariri and Beira in liberated portions of northern Mozambique. In 1973, at the age of 14, he joined FRELIMO. He was sent to Tanzania for political and military training.

On June 25, 1975, Mozambique became an independent nation under a FRELIMO government. In the 1980s Nyusi studied at the Antonin Zapotocky Military Academy in Brno, Czechoslovakia graduating in 1990 with a Master’s degree in mechanical engineering.

Between 1993 and 2002 Nyusi served as president of a top-division football club based in Nampula. He was also a lecturer at the Universidade Pedagogica in Nampula. In 1999 he pursued post-graduate studies in Senior Management at Victoria University in Manchester, England.

Nyusi remained active in FRELIMO (which had been the predominant political party in Mozambique since independence). On March 27, 2008, he was appointed Minister of Defense in the government of President Armando Guebuza.

In September of 2012 Nyusi was elected to the Central Committee of FRELIMO. In 2014 he was nominated by FRELIMO as the party’s candidate for president. He won the election and was inaugurated as the fourth president of Mozambique on January 15, 2015. In 2019 he ran for re-election and won 74% of the vote. He was inaugurated on January 20, 2020, for his second and final term.

Nyusi has faced numerous challenges during his time in office. His country remains one of the poorest in Africa with an unemployment rate of nearly 25%. In 2019 Mozambique was hit by two cyclones that wreaked considerable damage on large areas of the country. In the north Islamic rebels have gained a foothold. Troops from several other African countries, along with the Mozambiquan military, have been deployed to counter the insurgency.

In 2022 it was revealed the $2 billion in hidden loans had been secured by government officials fraudulently. Charges of corruption have been leveled against Nyusi’s government.

Meanwhile, the government is attempting to secure an investment of $25 billion in the Mozambique Liquid Natural Gas Project in hopes of expanding the economy and enriching the country. A vast quantity of natural gas was discovered in 2010 off the coast of northern Mozambique. Unfortunately, this is the same region where various rebel groups currently operate.

Filipe Nyusi is married to Isaura Ferrao Nyusi. They have four children: Jacinto, Florindo, Claudia, and Angelino. On January 3, 2022, President Nyusi and his wife, Isaura, tested positive for COVID-19. They went into isolation and have since recovered.