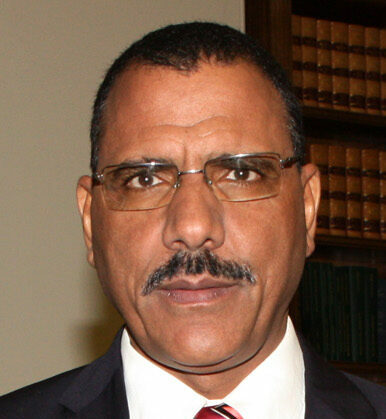 Mohamed Bazoum was sworn in as the president of Niger on April 2, 2021. Bazoum was born on January 1, 1960, at Bilabrine, Cercle N’guigme in Niger. His family were members of the Diffa Arab minority. He attended local schools in Niger. He then studied philosophy at the Cheikh Diop University in Dakar, Senegal. After earning his degree, he returned to Niger where he taught school.

Bazoum became involved in the trade union movement and politics in Niger. He and Mahamadou Issoufou found the Nigerien Party for Democracy and Socialism in the 1990s. In 1993 Bazoum was elected to the National Assembly. He served in the national government as Minister of Foreign Affairs in 1995. In 2011 he helped engineer Issoufou’s successful bid for the presidency. Between 2011-2015 he served as Minister of Foreign Affairs, Cooperation, African Integration, and Nigeriens Abroad. Bazoum served as Minister of State for Interior, Public Security, Decentralization, and Customary and Religious Affairs from 2016 to 2020 during Issoufou’s second term in office.

On March 31, a few days before Bazoum was scheduled to be inaugurated, a coup was attempted but was quickly put down by troops loyal to the government. Bazoum was sworn in, as originally planned, on April 2, 2021. This was the first time in Niger’s history that a peaceful transition from one democratically elected leader to another had taken place.

As president Bazoum faces huge challenges: extreme poverty, high unemployment, and jihadist rebel activity. Bazoum campaigned on limiting family size, increasing literacy in the country, and tackling corruption. He supports female education arguing that gender equality can be achieved through education. He plans to reinforce the security in the country and cooperate with neighboring states and France and the United States in fighting the ISIS insurgency that has been raging in parts of the Sahel.

Badoum is the first Diffa Arab to be elected president in Niger. He is married to Hadiza Ben Mabrouk.