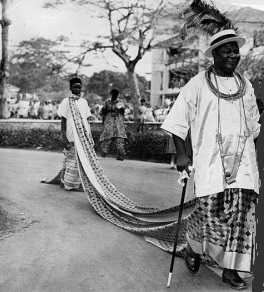 Chief Festus Samuel Okotie-Eboh, one of the Founding Fathers of the Republic of Nigeria, was born on July 18, 1912 in the city of Warri to an Itsekiri Prince, Okotie Eboh of Jakpa. His mother, Ekayoda Ojegba was from another ethnic group, Urhobo in Okpe Land in Delta State.

Under the sponsorship and tutelage of Reverend Aghogin Omatsola of the First Baptist Church in the City of Sapele in Delta State, young Festus moved from his birthplace to that city. He received his early education at the Sapele Baptist School, 1932-1936. After a brief period of teaching at his Alma Mater, he entered the Sapele Township Civil Service. Okotie-Eboh became one of the most successful Africans in business entrepreneurship; a transformative leader in Nigerian politics; an educator; philanthropist; the first African chiropodist; and was popularly regarded as one of the most flamboyant politicians of his era in Africa. He was known for showcasing Itsekiri traditional attire in a colorful flowing robe with a train several yards long carried by an aide.

Eboh married an Itsekiri woman, Victoria, in 1942. He started in business as an employee of the Bata Shoe Company, a well-known British Company in Colonial Africa. He quickly advanced to higher positions: Chief Clerk and Accountant, and First African Deputy Manager in West Africa. He left the Company to further his education in Prague, Czechoslovakia (now Czech Republic) where he received a Diploma in Business Administration and Chiropody.

Chief Okotie-Eboh entered Nigerian politics as a member of the National Council of Nigeria and Cameroon (NCNC) Party. In 1951 he was elected to the Western Region House of Assembly as well as Treasurer of the NCNC. He served as Federal Minister of Labor and Social Welfare (1955-1957); and First Nigerian Minister of Finance (1957-1966).

On January 15, during the 1966 Nigerian coup d’etat, Chief Okotie-Eboh along with Sir Abubakar Tafawa Balewa, Nigeria’s first Prime Minister (1960-1966), and other prominent leaders were assassinated. He was 53 at the time of his death and was survived by his wife Victoria and 14 children from their and other relationships.

Okotie-Eboh left a financial empire and was responsible for the establishment of the Nigerian Central Bank and the country’s first national currency. As of this writing the image of Okotie-Eboh is proposed to be displayed on a Nigerian currency note. On January 15, 2016, 50 years after his death a national colloquium was organized in the capital city of Abuja to immortalize the Chief.