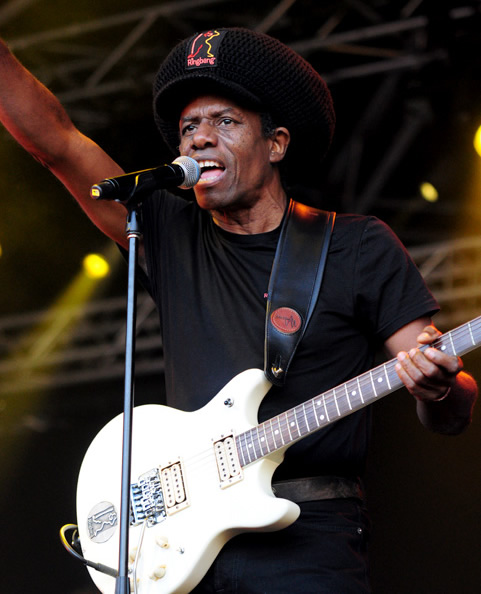 Composer, guitarist, and Reggae singer Eddy Grant was born Edmond Montague Grant on March 5, 1948, in Plaisance, Demerara-Mahaica, Guyana, to Patrick Alexander Grant, a trumpeter. He has one brother, Rudy Grant. In 1960, he emigrated to London where he studied at Acland Burghley Secondary Modern at Tufnell Park, a school for artistic students. Grant concentrated in music composition.

In 1965, during his junior year, Grant formed the Equals, the United Kingdom’s first ethnically diverse pop group. He graduated in 1966 and two years later the Equals had two hit albums and a minor hit single “I Get So Excited.”

In 1968 Grant and the Equals released “Baby Come Back” which was their first million-selling record. Grant was the lead guitarist and primary lyricist for the song. In 1969, Eddy married Ann Grant. They had a daughter Maria Grant-Kellman.

In 1975 Grant became a solo artist. His 1978 Walking On Sunshine album, the first of his career as a solo artist, was released on the Parlophone music label and sold more than 500,000 copies. It was followed by the 1980 single “Do You Feel My Love” from his album, Can’t Get Enough, which peaked at no. 8 on the UK Singles Chart and reached 39 in the United States, 41 in Australia, and 43 in Germany. In 1982, the album Killer on The Rampage peaked at no. 10 on the US Billboard 200 chart and sold more than one million copies. It reached no. 9 in New Zealand and peaked at no. 11 in both Australia and Germany, no. 30 in Sweden and 45 in the Netherlands indicating that Grant was a major international record artist.

Grant released “Electric Avenue” in 1983 which peaked at no. 2 in both the UK and US and sold more than one million records making it the biggest hit of his career. In 1990 he released he released the album Barefoot Soldier, followed by Paintings of The Soul in 1992, Soca Baptism in 1993 and Hearts and Diamonds in 1999. In 2001 his Greatest Hits album peaked at no. 3 in the UK.

Grant was honored with a postage stamp featuring his likeness and Ringbang logo by the Guyana Post Office Corporation in 2005. In 2006, he released Reparation, and in 2008 he performed for South Africa’s President Nelson Mandela on his 90th birthday.

In 2014, Edmond Montague Grant was honored for his contributions to the music industry with a lifetime achievement award at the Inaugural African Business Awards dinner in honor of African descendants in Georgetown, Guyana. Grant also received the National Award, the highest honor and distinction bestowed upon a citizens born in Guyana for his or her service to the nation. The award was presented by Guyana’s former President David Granger in 2020 to mark its 50th anniversary of the Republic.