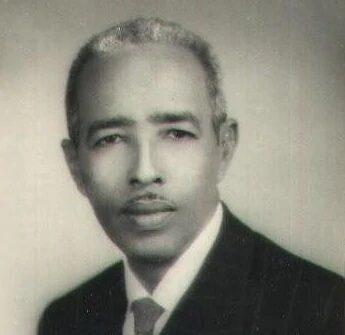 Aden Abdullah Osman Daar (popularly known as Aden Adde) was the first president of Somalia. He was born on December 9, 1908, in Beledweyne, Somalia while the country was colonized by the Italian government. Daar was orphaned at an early age and raised by members of his extended family and clan. He attended various government schools. An avid, self-taught reader, he became fluent in several languages: Somali, Arabic, Italian, and English.

Daar was employed by the Italian colonial administration from 1929 to 1941. In 1944 he joined the Somali Youth League which promoted the interests of Somalis in the colony. At the end of World War II, the United Nations granted Italy trusteeship of Italian Somaliland, but only under close supervision and on the condition first proposed by the Somali Youth League and other local groups that Somalia achieve independence within ten years.

In 1946 Daar became secretary of the local Somali Youth League branch in Beledweyne and he continued to advance in the party. Between 1954 and 1960 he was national president of the Somali Youth League. In 1954 he was also appointed to a regional government council by the trusteeship administration.

On July 1, 1960, the United Nations approved independence for the Somali trusteeship which then united with the smaller colony of British Somali protectorate as one nation. Daar was chosen as the first president of Somalia.

President from July 1, 1960, until June 10, 1967, Daar was defeated in the 1967 election and after graciously ceding power to his successor, Abdirashid Shermarke, retired to his farm. He was one of the first African heads of state to hand over power to an elected successor. In 1969 Daar was arrested by Siyad Barre who had taken power through a military coup but was released in 1973.
Aden Abdullah Osman Daar died on June 8, 2007, in a Nairobi, Kenya hospital. He was 99 years of age. The government of Somalia honored the first president by renaming the Mogadishu airport the Aden Adde airport.

Daar was married and had several children. One son, Osman Aden Abdulle, is a prominent physician and geneticist.