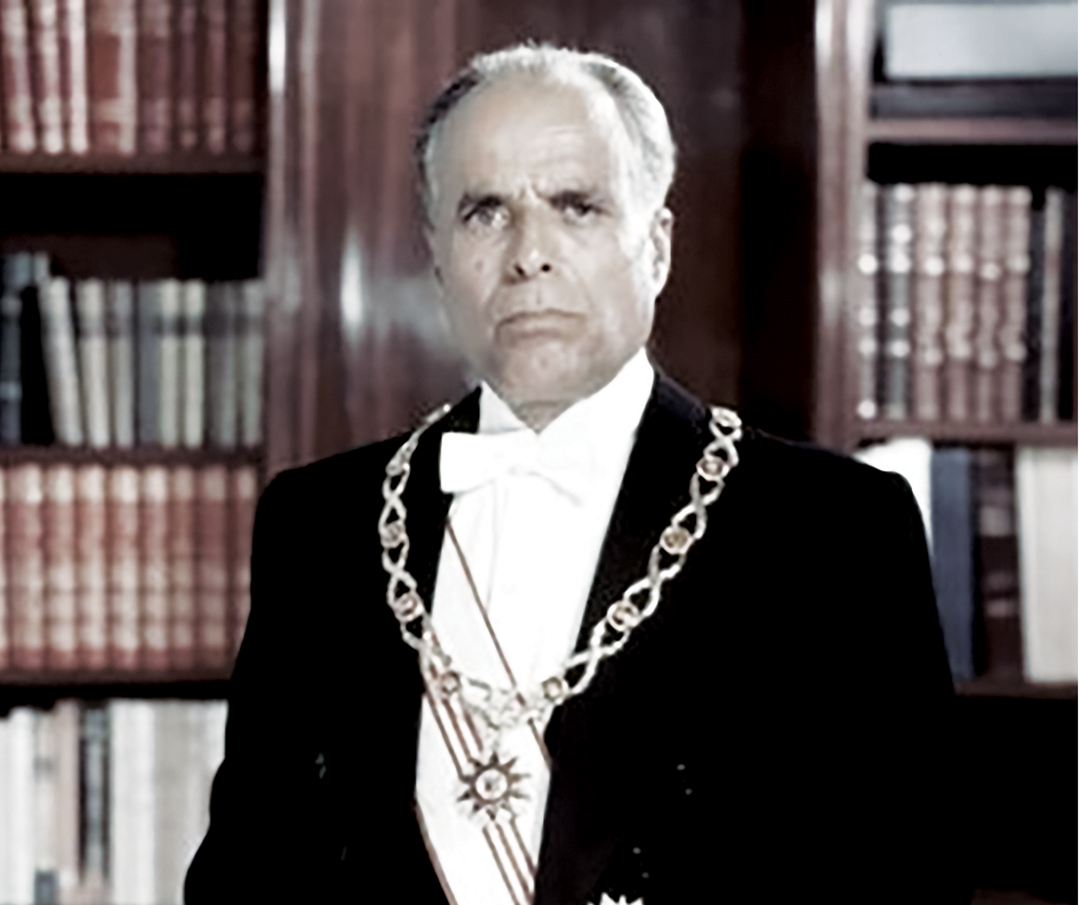 Habib Bourguiba, the first leader of independent Tunisia, was born on August 3, 1903, in Monastir, Tunisia, then a French protectorate. His parents were Ali Bourguiba and Fatouma Khefacha. His father sent him to Tunis when he was five to pursue his studies at the Sadiki primary school. He then attended high school, graduating in 1924. Bourguiba then moved to France where he studied law and political science at the Sorbonne.

After completing his studies, Bourguiba returned to Tunisia where he practiced law and also became involved in politics. In 1933 he founded a pro-independence newspaper and became active in the Destour (constitution) party. He felt the party was too conservative and in 1934 founded the New Destour party, becoming Secretary-General of the new organization. His political activism resulted in confrontations with the French authorities. On September 3, 1934, Bourguiba was arrested, tried, and sent to a prison in the Tunisian desert.

In 1936 Bourguiba was released but he continued working for the nationalist cause. New Destour actively promoted and supported the formation of labor unions. Workers, students, and women were all encouraged to participate in party and pro-labor activities. This activism resulted in him being interned in a French military prison from 1938 to 1942.

After his release from prison a second time, he returned to political activism but grew frustrated with the lack of major accomplishments by peaceful means. In 1954 he announced that the Tunisian nationalists would begin an armed struggle. This move alarmed the French and they soon entered into negotiations with Bourguiba. In June 1955 the French recognized “internal autonomy” for Tunisia. Tunisian government internal affairs would be directed by Tunisians but the French would retain control of defense and foreign affairs.

On March 20, 1956, Tunisia became independent with Bourguiba as Prime Minister. He immediately made fundamental changes in Tunisian society. He placed Koranic schools under the authority of the Ministry of Education which would monitor the curricula. He built new western-style schools and proclaimed free education for boys and girls. He led a gender equity campaign that gave women the same employment rights as men. On August 13, 1956, the Code of Personal Status was enacted. Women had the right to consent to marriage and a minimum age of marriage was enacted. Divorce was allowed while polygamy was abolished. Religious courts were suppressed in favor of government courts.

Political changes were also enacted. On July 25, 1957, Tunisia was proclaimed a republic with Bourguiba as president. The traditional royalty was abolished, and their property was confiscated and sold to help finance social programs. A new, republican, constitution was written and adopted on June 1, 1959.

In the 1960s Tunisia experimented with socialism but by the 1970s it returned to an export-oriented capitalist economy. Despite close ties to France and the United States, Bourguiba centralized power and in 1975 was elected President for Life.

In the late 1980s, Bourguiba started exhibiting erratic behavior. In 1987 doctors determined he was not mentally sound. The Prime Minister, Zine el-Abidine Ben Ali, in consultation with the military, organized a “medical coup” and was proclaimed President on November 7, 1987.

Habib Bourguiba died at Monastir, Tunisia on April 6, 2000, at the age of 96. He was married to Mathilde Lorrain and they had one son, Habib Bourguiba, Jr. They divorced in 1961.

He later married Wassila ben Ammar and they had a daughter, Hajer Bourguiba. They divorced in 1986.