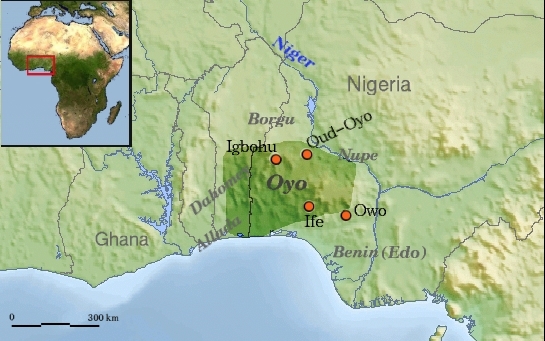 Oyo, a pre-colonial kingdom in present-day Nigeria, was founded in the 1300s. Established by Oranmiyan of the Yoruba people of West Africa, Oyo quickly grew to become one of the most powerful states in the Yoruba-speaking region.  From its capital city at Oyo-Ile, this weak state in the early 1500s, had by 1550 conquered two neighboring kingdoms, Borgu and Nupe, to become the most dominant political entity in the region.

Oyo was ruled by an alafin (king) who shared power with the Oyo Mesi, aristocratic leaders from each of Oyo city’s seven wards.  The Oyo Mesi were responsible for the selection of the alafin. They could also call for an alafin’s suicide if he abused his power.

In response to attacks by the Nupe people, Oyo became much more militarized, reorganizing its cavalry and infantry in the sixteenth century. The cavalry became the foundation of the army.  Because of its Atlantic ports, Oyo was able to obtain horses for its cavalry from Europe and North Africa.

Oyo’s wealth from trading and especially slave trading led to debates about the kingdom’s future. Some alafins wanted to use the wealth to maintain the army and expand the geographic area of the state, others wanted it for conspicuous consumption.  These differences led to civil wars as rivals competed for control of the throne and of Oyo’s vast treasury.  This period of internal strife ended with Alafin Abiodun (1754-1789) who reduced the power of the army.

The downfall of the Kingdom of Oyo was rather swift.  Abiodun, concerned with little other than grand displays of royal wealth, allowed the Oyo army to disintegrate.  This in turn allowed weaker peripheral states to break free of Oyo’s control.  One of those states, Dahomey, in the southwest, soon became a political and military rival. Oyo was also affected by the Fulani Jihad waged by Muslims on its northern frontier.   Eventually these provinces broke free as well.

By the beginning of the 19th Century Oyo lost control of lucrative trade routes which had been a major source of state revenue.  By 1837, the kingdom of Oyo had collapsed.