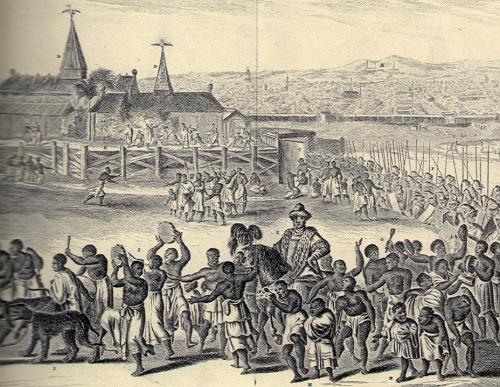 Benin, a pre-colonial kingdom in what is now southwestern Nigeria, is believed to have been established before the eleventh century. It was founded by Edo-speaking peoples, but became more ethnically diverse when invaders from the grasslands of the Sudan settled and intermarried with local women. Based on oral tradition, Benin is said to have begun as family clusters of hunters, gatherers, and agriculturalists who eventually created villages.  By 1300, Benin was heavily involved in trade and the arts, using such mediums as copper, bronze, and brass.  The Benin bronzes eventually became some of the most famous art pieces produced in Africa.

Benin’s early society started as hierarchical, with an Ogiso (King of the Sky) as the head assisted by seven powerful nobles (uzama). These kings established the city on Ubini, later Benin City, in 1180 A.D. Around 1300 the people of Benin rebelled against the Ogiso and invested power in a new ruler, Oranmiyan, who took over only long enough to have a child, Eweka I. Oranmiyan created a new dynasty, calling himself the first Oba (king) of Benin.  The Obas would rule Benin for the next six centuries. Eweka  I, the second Oba, however, reorganized the army and took power from the uzama, giving it instead to his supporters.  Thus, the new nobility answered only to him.

The fifteenth and sixteenth centuries marked the high-point of Benin’s economic and political power. The kings initiated military campaigns that extended the kingdom on all sides. They also began to trade with Europeans, especially the Portuguese who reached Benin City in 1485.  Benin exchanged palm oil, ivory, cloth, pepper, and slaves for metals, salt, cloth, guns, and powder.  Although Benin’s earlier power rested with its domination of interior trade routes, commerce with the Europeans required expansion to the ocean since Benin City, the capital, was 50 miles inland. This problem, however, was solved with the creation of a fort and port on the coast. Benin was desperate to keep trade with the Portuguese who supplied the guns that gave it military superiority over its neighbors especially after its attempt to manufacture guns locally failed.  Recognizing his leverage, King Manuel I of Portugal threatened to end the gun trade unless Benin’s rulers adopted Christianity. The attempt failed but the Portuguese continued to supply guns because the slave trade proved too lucrative for either nation to end.

Benin, however, began a slow decline in the 1700s as neighboring nations gained access to Portuguese or other European firearms. The kingdom was also weakened by internal disputes over royal succession which often led to civil wars.  By the 1890s, Benin was unable to resist British conquest.  In 1897 it was incorporated into Great Britain’s Niger Coast Protectorate after a British force conquered and burned Benin City and in the process destroyed much of Benin’s treasured art while sending remaining pieces to London.  The British allowed the Oba of Benin to continue as a ceremonial ruler but all effective power from that point was in the hands of British colonial administrators. The current Oba of Benin serves as a ceremonial ruler in Nigeria.