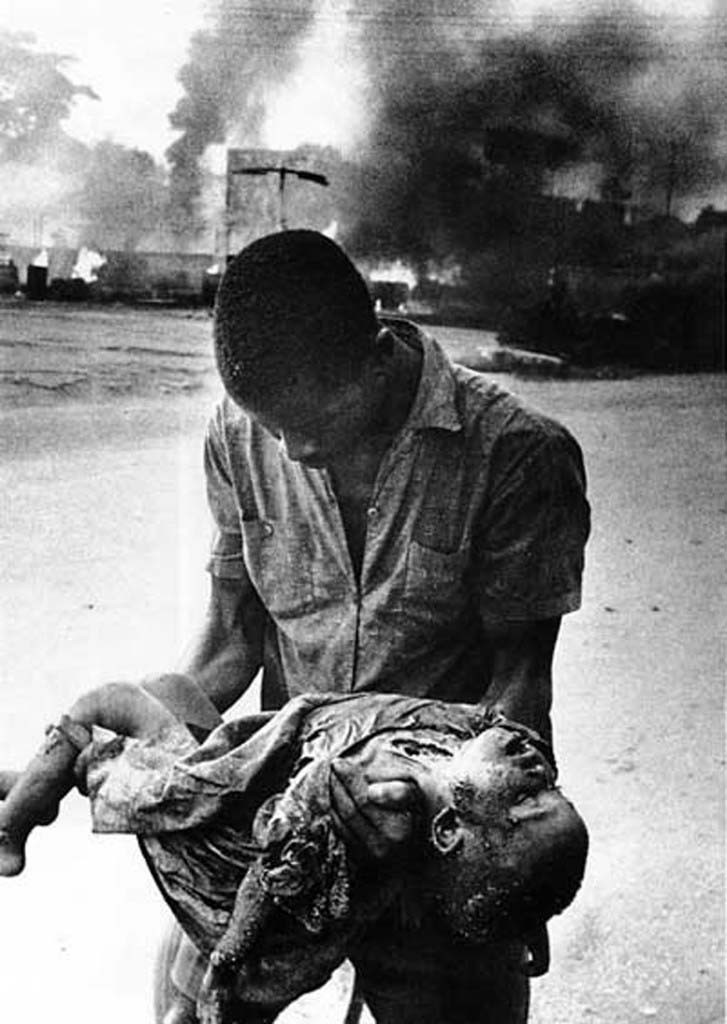 Biafran Casualty in the Nigerian Civil War
Fair use image

The Nigerian Civil War, also known as the Nigerian-Biafran War, was a three-year bloody conflict with a death toll numbering more than one million people. Having commenced seven years after Nigeria gained independence from Britain, the war began with the secession of the southeastern region of the nation on May 30, 1967, when it declared itself the independent Republic of Biafra. The ensuing battles and well-publicized human suffering prompted international outrage and intervention.

Carved out of the west of Africa by Britain without regard for preexisting ethnic, cultural and linguistic divisions, Nigeria has often experienced an uncertain peace. Following decades of ethnic tension in colonial Nigeria, political instability reached a critical mass among independent Nigeria’s three dominant ethnic groups: the Hausa-Fulani in the north, Yoruba in the southwest, and Igbo in the southeast. On January 15, 1966, the Igbo launched a coup d’état under the command of Major-General Johnson Thomas Umunnakwe Aguiyi-Ironsi in an attempt to save the country from what Igbo leaders feared would be political disintegration.

Shortly after the successful coup, widespread suspicion of Igbo domination was aroused in the north among the Hausa-Fulani Muslims, many of whom opposed independence from Britain. Similar suspicions of the Igbo junta grew in the Yoruba west, prompting a joint Yoruba and Hausa-Fulani countercoup against the Igbo six months later. Countercoup leader General Yakubu Gowon took punitive measures against the Igbo. Further anger over the murder of prominent Hausa politicians led to the massacre of scattered Igbo populations in northern Hausa-Fulani regions. This persecution triggered the move by Igbo separatists to form their own nation of Biafra the following year.

Despite the lack of resources and international support, Biafra stood firm refusing to surrender in the face of overwhelming Nigerian military superiority. The Nigerian Army however continued to slowly take territory, and on January 15, 1970, Biafra surrendered when its military commander General Chukwuemeka Odumegwu Ojukwu fled to Cote d’Ivoire.

During this civil war, an estimated 3,000 to 5,000 people died daily in Biafra from starvation as a result of the naval blockade. The international reaction to the military conflict helped define how the world now views and responds to similar crises.