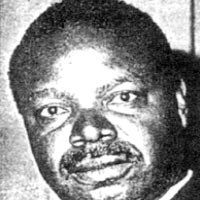 On August 18, 1973, Hudson William Edison Ntsanwisi, then Chief Minister of the “independent homeland” of Gazankulu in South Africa, was scheduled to present an address titled “Petty Apartheid” before the Sociological Symposium at the University of Pretoria.  Although the presentation was not made, his address survives and appears below:

Much has been written and heard about apartheid, the policy followed in the Republic of South Africa in which people are grouped for purposes of government and politics into different categories. This policy in the main provides for complete territorial separation of the races in South Africa, with special emphasis on separate political, economic and cultural development of the various ethnic and linguistic groups within the Republic of South Africa. As far as the whites are concerned ethnic, cultural and linguistic differences are not taken into consideration as they are placed in one white homeland.

According to census statistics South Africa has a population of 21 million people of whom 3-3/4 million are whites — the white homeland presently constitutes 87 per cent of the land while 13 per cent has been allocated to the blacks. This aspect of apartheid which is sometimes referred to as macro-apartheid therefore also discriminates against the blacks and is advantageous to the whites.

Meso-apartheid, which is physical separation resulting in homogeneous residential ghettos within multiracial urban areas, is also advantageous to the whites since they live in the best residential areas in the cities. Micro-apartheid is referred to as separation in private and public facilities. This is also advantageous to the whites since they are provided with the best of facilities and enjoy preference in the use of all facilities. In certain instances such as lifts, the whites use facilities meant for the blacks whenever that suits them. All these forms of apartheid have to my mind one thing in common, i.e. discrimination based on color. For this reason the expression micro-apartheid or petty apartheid cannot be easily defined as it is nothing else but a manifestation of the whole concept of apartheid. It is therefore difficult to isolate petty apartheid from the broad spectrum of apartheid. In this paper, however, we shall discuss petty apartheid as micro-apartheid.

Petty apartheid has been described as discrimination in public and private facilities. This type of discrimination or apartheid is observed in railway stations, trains, buses, public buildings, banks, beaches, etc, where there are separate facilities for whites and blacks. Notices ‘Whites Only and ‘Non-Whites’ are seen all over the country in parks and lifts in buildings.

This discrimination is based on color; it is a form of apartheid based on racism. It is seen in the Separate Amenities Act and other restrictive legislation which debar any person who is not white from enjoying many facilities and rights in the land of his birth. This petty apartheid is irritating and hurtful to the soul of the black man who is discriminated against and it is an affront to human dignity.

Petty apartheid with its grossly unequal facilities constantly reminds the black of his second class place in the social life of South Africa and it is no doubt a source of emotional pride, economic and other practical advantages to the whites. The gains that the white obtains from petty apartheid are no doubt substantial but one doubts as to whether this contributes anything towards the maintenance of white supremacy other than his ego — especially the ego of those whites who have nothing to pride themselves on except the pigment of their skin. The observance of petty apartheid is definitely not a cornerstone of the socio-political order. The Portuguese in Mozambique and Angola still maintain their rule without resort to petty segregation and thus claim that they are free of racial prejudice.

Petty apartheid generates hatred, bitterness, spiritual and social tensions which bedevil human relations in South Africa. A black man who visits distant countries overseas where there are no notices for ‘Whites Only’ is forcibly reminded of his second class status as soon as he lands on South African soil because now and then he must stop and watch as to whether he is not treading on forbidden ground. There are white people now who feel that petty apartheid serves no useful purpose, but unhappily they are not many. Many black people, especially the educated and the young, have ceased to respect the white man as a result of petty apartheid, because disrespect begets disrespect. Any man of self respect feels deeply hurt when he is discriminated against on the grounds of his color.

All that we black people want is to be treated like men, to believe in our hearts that we are men — men who can stand on our own feet and control our own destinies. We are not interested in the patronizing attitude of the white man; we don’t seek any favors; we want to be afforded the opportunity to pay our passage through life. What we want is not favors or privileges but rights. For the sake of posterity; and the future survival of this country, discrimination based on color must go; the matter is urgent and the time is short.

We may indeed be ‘aridersoortig’ (different) in that our cultures and backgrounds differ. But this is surely no justification for hurting my dignity by forcing me to enter by another entrance or pay at another counter. Many people of goodwill are today looking for a solution to this violence on the dignity of man. This will require sincerity, courage and heroic decisions on the part of political leadership, university professors and other educators, businessmen, employers and employees, teachers and students, trade unionists and parents and teachers and, particularly, the white electorate. Those who hesitate to act because of the colossal nature and apparent magnitude of the problem must realize that we are daily moving towards a deep precipice from which we shall not be able to extricate ourselves.

I have pointed out all these things because I firmly believe that there can be no real progress in the crucial race relations in this country unless the hurt to human dignity, by measures inherent in petty apartheid, is pointed out in forthright terms for all to see and understand and take some concrete action to counteract this explosive race problem before our borrowed time is up.