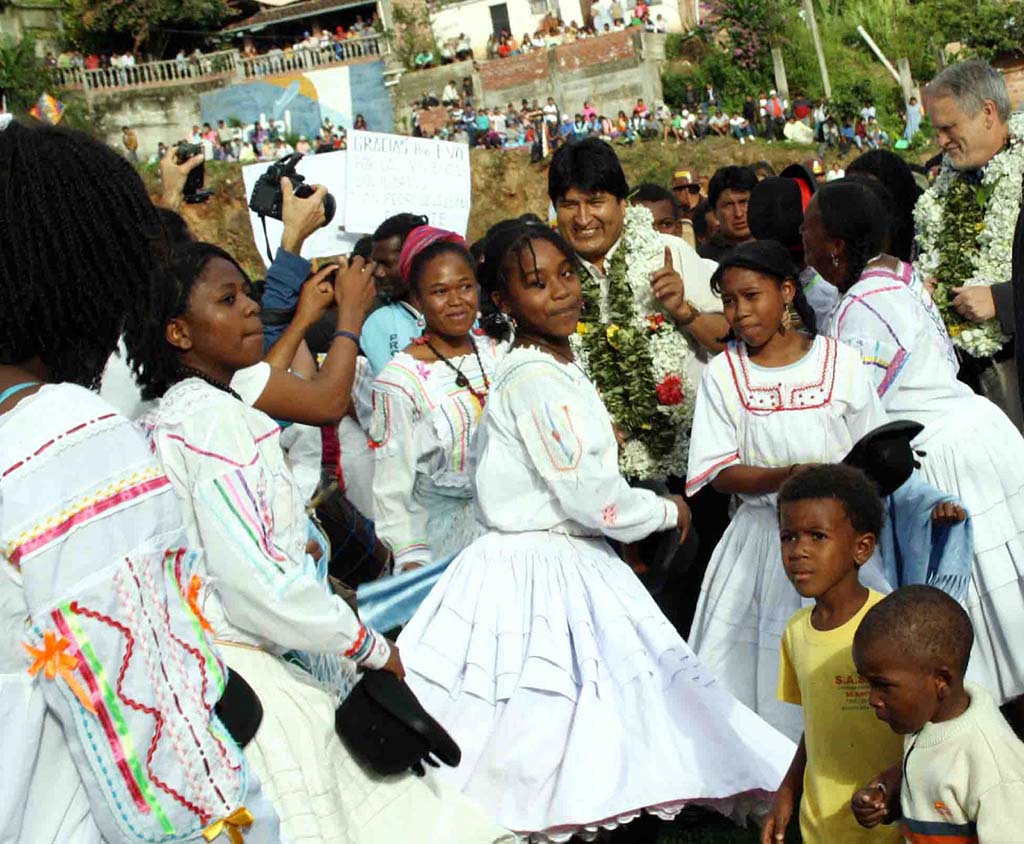 Mururata is a large village located in the tropical valleys of the Yungas region of Bolivia. Although the population of the village is small when compared to neighboring cities, the people who reside there are overwhelmingly of African descent. Mururata is less than 150 miles away from La Paz, the third largest city in Bolivia and one time capital. Yet due to factors such as a rough terrain, frequent mud and rock slides, hazardous roads, and steep inclines, those who reside in the Yungas are almost completely separated from the rest of Bolivian society. Most of the houses are made from adobe or a mixture of mud and wood while the roofs are made from metal or special thatching. There are no plumbing facilities and many residents draw water from wells. Those living in the region grow oranges, coffee beans, and other tropical fruits.

The history of Mururata and the surrounding region dates back to the 16th century. Spanish Conquistadors discovered silver in mines in what is present day Potosi in 1544 and needed labor to extract the silver. Natives residing in the area were the first enslaved to work in the mines but most died because of harsh working conditions and the introduction of European diseases into the local population.

At the beginning of the 17th century the Spanish brought in a number of African slaves to work alongside the remaining natives. The high elevation of 13,000 feet, toxic vapors, the possibility of cave-ins and explosions reduced the life expectancy for those working in the mines to an average of six months.  Most Africans as well as natives perished under these conditions.  Even African and native children were not exempt from the risks of working in the mines.  They did, however, have shorter hours. An estimated eight million Africans and natives died from working in Bolivian silver mines during the nearly three centuries between 1544 when the Spanish first arrived and 1825, the end of the colonial period.

Bolivia officially ended slavery with its independence from Spain in 1825.  Yet, as a practical matter, enslavement continued until 1851.  By that point many Afro-Bolivians headed towards the Yungas, a semitropical region near the border with Peru, and formed villages such as Mururata.  By this point Afro-Bolivians were no longer counted as a separate group because they were free citizens.

After freedom, many Afro-Bolivians intermarried with the Aymara Indians in the Yungas and much of the separate language, dress, and other distinctive cultural patterns began to disappear as they were absorbed into the much larger indigenous population.

The late 20th century saw a revival of an important Afro-Bolivian cultural piece, the saya dance, especially after the Bolivian government officially recognized the importance of preserving what remained of the African legacy in the region. Because of its isolation, the village of Mururata held onto its African heritage longer than most other areas in Bolivia.  Beginning in the 1960s, the government recognized a member of the town as its “African King.”  The current King is Julio Pineda.  This purely ceremonial post allowed the community to retain its links to its African past.  That recognition was bolstered by the 2006 decision by the Bolivian government to recognize and count Afro-Bolivians as a separate group in the national census.