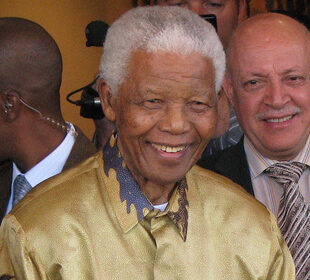 Nelson Rolihlahla Mandela, the first president of post-Apartheid South Africa, was born on July 18, 1918 in Qunu in the Transkei. His father was a counselor to the paramount chief of Thembuland, and young Nelson seemed destined to inherit the counselorship. But he had his mind set on law and service outside of royalty.

After his secondary education, Mandela entered the University College of Fort Hare, where he was elected to the students’ representative council. Expelled in 1940 for organizing a boycott, Mandela moved to Johannesburg where he completed the bachelor’s degree. He also began studying law at the University of Witwatersrand.

Nelson Mandela joined the African National Congress (ANC) in 1940, along with friends Oliver Tambo and Walter Sisulu. Dissatisfied with the moderate approaches of the ANC, Mandela helped launch the ANC Youth League dedicated to a radical program of boycotts and civil disobedience against South Africa’s apartheid policies in 1942. In 1950, he became member of the National Executive Council of the ANC, and two years later, he assumed leadership of the grassroots Defiance Campaign. He was arrested, charged, and given suspended sentence. However, his movements were restricted.

During this time, Mandela completed his law degree, and he and Tambo established a law practice in Johannesburg. In 1952, as both president of the Youth League and deputy ANC President, Mandela intensified his grassroots resistance efforts. In 1956, he was arrested for treason, tried and acquitted. After the Sharpeville Massacre of 1960, South Africa banned the ANC. In response, Mandela helped create a military wing, Umkhonto we Sizwe, which signaled an official adoption of violence. At the All African Conference in March 1961, Mandela denounced apartheid and advocated a new democratic constitution. He left the country briefly in 1962 to mobilize external pressures. Not long after his return, Mandela was arrested and charged with illegal exit and inciting strikes. He was tried, convicted and sentenced to five years. While in prison, the government charged Mandela and the entire ANC leadership with treason and conspiracy. They were found guilty and sentenced to life in June 1964.

In 1990, South African President F. W. de Klerk lifted the ban on the ANC and released Mandela unconditionally. Mandela, who had long envisaged a multiracial democratic government for South Africa, pledged commitment to peace and reconciliation as the nation moved toward a post-apartheid political order.  Mandela and de Klerk immediately began working together for a peaceful transition to democracy. For their efforts, they won the 1993 Nobel Peace Prize. In 1994, under the leadership of Mandela, the ANC won South Africa’s first multiracial election which also elevated Nelson Mandela to the presidency. As president, Mandela administered the gradual dismantling of apartheid, and devoted resources to employment, housing and basic health. In December 1996, Mandela signed into law a new constitution, which established majority rule, and also guaranteed minority rights and freedom of expression. Mandela retired at the end of his first term in 1999.

In 2004, Mandela announced that he was “retiring from retirement” and again became involved in South African and global humanitarian causes including the campaign against AIDS. By the summer of 2013 Mandela’s health began to rapidly deteriorate. Nelson Rolihlahla Mandela died on December 5, 2013 at his home in Johannesburg, South Africa surrounded by family and friends. At the time of his death he was 95.