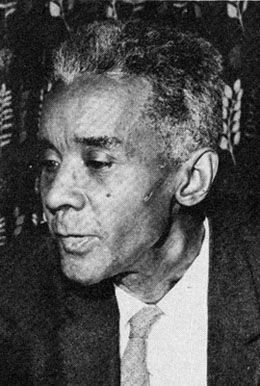 Cyril Lionel Robert James was born in the British colony of Trinidad on January 4, 1901.  James was a bright youth who absorbed literature, history, music, sports, and art-the foundational texts of Western civilization.  He attended Queen’s Royal College in Port of Spain, but chafed at the rigid disciplinarianism of the educational British system.  Yet he was deeply interested in and influenced by the game of cricket introduced by the British and became a local cricket reporter before turning to fiction.  James wrote several early works of fiction in Trinidad before sailing for England in 1932 at the age of 31.  While in England, James spent a great deal of time focusing his writing on issues relevant to the expatriate West Indian community.  He published The Case for West Indian Self-Government in 1933.

James was increasingly exposed to social issues and turned to the writings of many Communist thinkers in this period.  He became a major Trotskyist thinker as well as an ardent critic of fascism.  He produced a play, Toussaint L’Ouverture, with Paul Robeson in the lead role which reflected his political leanings. James was becoming more interested in revolution and social liberation as well as questions of race.  He published his landmark work, The Black Jacobins, in 1938, offering a Trotskyist analysis of the 1791 slave revolution in Haiti.  James and his fellow Trotskyites remained opposed to Stalinism and offered virulent critiques of the system throughout the 1930s.

C.L.R. James arrived in the United States in 1938 and remained for the next twenty years.  While in the U.S., he began to have doubts about the Trotskyist analysis of the Soviet Union and argued for a liberation of Marxism through a bottom-up emphasis.  He also studied Whitman and Melville in this period.  James returned to England in 1953 and five years later went back to his native Trinidad where he became involved in politics and the decolonization movement. James published Beyond a Boundary in 1963, a memoir and social commentary, that explored the place of cricket in West Indian and British society and its role in empire, family, masculinity, race, class, national culture, colonization, and decolonization.  The work is widely viewed by critics as one of the best sports books ever written.

After 1960 James traveled widely throughout Africa and the Caribbean and was interested in the role of culture across boundaries.  As a West Indian deeply-infused with Western culture, he sought to carve out a space of independence while still maintaining his love for what he saw as a series of cross-national ideals.  He taught at the University of the District of Columbia starting in 1968 and wrote a series of works on culture, politics, radicalism, and revolution.  James passed away on May 19, 1989 in London, England, on the brink of the collapse of the Soviet Union.  He was survived by his widow Selma.