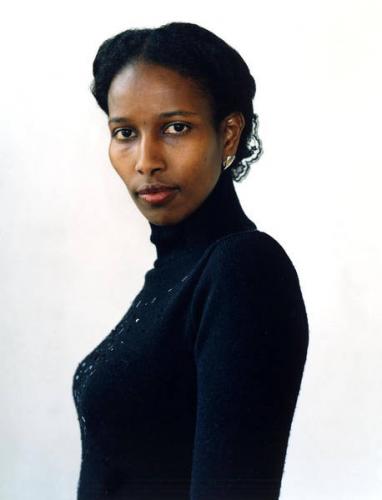 Writer and activist Ayaan Hirsi Ali was born in Mogadishu, Somalia on November 13, 1969.  Her father, Hirsi Magan Isse, was a prominent Somali intellectual and revolutionary leader.  As a child, Ali had to move with her family to Saudi Arabia, Ethiopia, and Kenya, due to political turmoil in her own country and her father’s political background.  Ali was educated in Kenya at the Muslim Girls’ Secondary School where she was exposed to Islamic scholarship and religious life.  She was also exposed to Western culture and values in Kenya and began to lament what she saw as the rise of radicalized Islamic traditions imported from Saudi Arabia into East Africa.  Ali asked for political asylum in The Netherlands in 1992, claiming a forced marriage.  Although the story of her asylum is shrouded in controversy, Ali worked in a variety of social service and other jobs while studying Western political and social theory. She also studied at Leiden University where she earned her MA degree in Political Science in 2000 and went on to work as a Researcher at the Wiardi Beckman Foundation in Amsterdam from 2001 to 2002.

Ali’s growing disenchantment with Islam as well as her exposure to Western thinkers caused her to become an atheist and virulent critic of the religion.  She served as a member of the Dutch parliament from 2003 to 2006 and worked actively to integrate non-Western immigrants into Dutch society.  In 2004, she collaborated with Dutch filmmaker Theo van Gogh on the film Submission, which portrayed the oppression of women in conservative Muslim immigrant societies.  Van Gogh was assassinated by a Muslim religious extremist and Ali was forced into hiding as a result of the film.  Controversy arose as to how she received her citizenship and false statements which may have been made in the process as well as the vast resources the Dutch state had to spend to protect her.

Her books include the controversial memoir Infidel (2007) and The Caged Virgin (2006) about the role of the individual in Islamic society, the question of Westernization, and gender.  She has also participated in a variety of forums and written numerous articles related to contemporary religious, political, and social issues.  Ali is a Visiting Scholar at the conservative think-tank The American Enterprise Institute where she focuses on Islam, Gender, Westernization, and Immigration.  She is a staunch advocate of the forced integration of immigrants into Western societies and the acceptance of Western values and traditions as well as an activist, pre-emptive Western foreign policy with regard to the Muslim world. Ali is also a critic of the place of women in Islam, female genital mutilation, what she perceives as a lack of reason and rationality in the Muslim world, and her interpretation of the religion as intolerant.  Ayaan Hirsi Ali remains a controversial figure with numerous critics.  In 2005, she was named by Time magazine as one of the “100 Most Influential People in the World.”