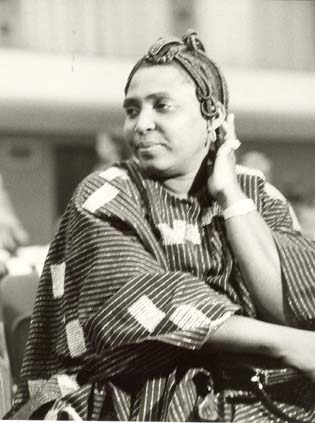 Writer and political activist Mariama Bâ was born in 1929 in Dakar, Senegal to a well-to-do family.  Her father worked in the French colonial administration and in 1956 became the Minister of Health of Senegal.  Her mother died when she was young.  Bâ was raised by her maternal grandparents who emphasized conservative Muslim values.  She attended a religious school, but was also educated in the French tradition.  Due to the intervention of her father, she was enrolled in 1943 in the Ecole Normale (Teacher Training School) at Rufisque, a town some 25 miles away from Dakar where she received her diploma in 1947.  Bâ worked as a teacher from 1947 to 1959, before becoming an academic inspector. During this period, Bâ had nine children with her husband, Obeye Diop.  The couple separated and Bâ was forced to raise her children as a single parent.

By the late 1970s, after most of her children were adult, Bâ turned to political activity. She became a vocal activist for women’s rights in Africa and a critic of the neocolonial system that had evolved in most of the newly independent African nations.  She was also concerned with and wrote about a number of feminist issues such as polygamy, mistreatment of women in Senegalese society, ostracism of the castes, the exploitation of women, violence against women, and lack of educational opportunities for girls.

Her first and most significant novel, Une Si Longue Lettre (So Long a Letter) was published in 1979.  It stands as a landmark of African and Francophone literature which received widespread critical acclaim as well as the Noma Prize for African Literature. Her novel has been translated into numerous languages and is a staple of francophone literature courses worldwide.  So Long a Letter is an epistolary novel, written in the form of a letter from a widow to a friend who lives in the United States following the death of her husband.  The widow grapples with her polygamous situation as well as the rise of modernity and Westernization.  She recounts that, despite the fact that her husband has taken another wife after 25 years of marriage, she remained faithful to her values and religion.  Her quiet strength, common sense, and courage are a direct contrast to the depiction of males in the story, including the husband.

Her second novel, Scarlet Song, published posthumously in 1986, also received international attention.  The book deals with an interracial relationship in Senegal and the struggle of women to overcome the traditional system of polygamy and gender discrimination.

Bâ advocated a greater voice for African women, a sense of emancipation and the changing of laws and traditions which served to subjugate women.  She was also an advocate for African cultural revival.  In her 1981 work, La Fonction politique des littératures africaines écrites, she argued that Africans should embrace and feel pride in their culture and achievements.

Mariama Bâ died in Dakar, Senegal in 1981 after a long battle with cancer. A prestigious boarding school on nearby Goree Island is named in her honor.