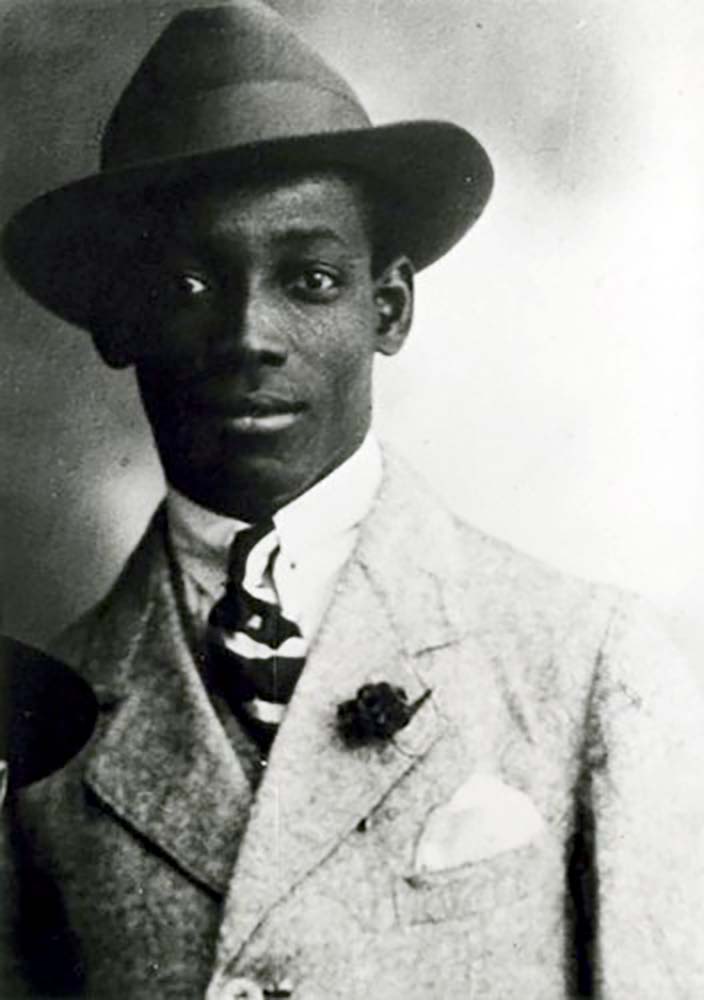 Anton de Kom (Cornelis Gerhard Anton de Kom) was a Surinamese author, anti-colonial activist, trade unionist, and World War II resistance fighter. De Kom was born in Paramaribo, Suriname, a colony of the Netherlands, on February 22, 1898 to a former slave and farmer Adolf de Kom and a free woman Judith Jacoba Dulder.  Much is unknown of his early except that he earned a secondary school diploma in accounting.

In 1916, de Kom found an office job at Balata Compagnieën Suriname en Guyana (Balata Companies Suriname and Guyana), a Company that exported latex for consumer products. He demonstrated concern for his company’s new and unskilled workers, the formerly enslaved people, who endured poor working conditions. His support for workers’ rights gained him the nickname “Papa de Kom” before he left the company.

In 1920, de Kom moved to Haiti and worked at the Societé Commerciale Hollandaise Transatlantique (Dutch Transatlantic Trading Company).  Several months later, he sailed to the Netherlands where he volunteered for a year in the Dutch military.  He subsequently worked for businesses as a consultant and salesman in the Hague, a city in the Netherlands.

Outside of his work, De Kom engaged in leftist politics and activities, often affiliating with groups that opposed European imperialism and fascism. He then began to campaign for the independence of Suriname. In 1926, he married a Dutchwoman, Petronella Borsboom, and returned with her to Suriname in 1933 to reportedly visit his ailing mother. By then, the Dutch government had placed him under surveillance as a possible threat to their colonial control of Suriname.

The fears by the Dutch government became warranted. De Kom soon challenged the colonial administration by alerting workers with information about their rights and organizing them to protest colonial rule.  On February 1, 1933, he marched with a crowd of followers toward the governor’s office.  Colonial authorities arrested De Kom and charged him with attempting to overthrow the government.  He was immediately imprisoned for three months in Fort Zeeland. Hundreds of people rallied to the jail resulting in an uprising.  Preempting further labor disturbances, the government deported de Kom back to the Netherlands where he was welcomed back as a hero by Dutch communists and other leftist supporters.

The legacy of slavery and racial discrimination had long been a preoccupation of de Kom who wished to mitigate the effects of Dutch colonial rule in his homeland and inspire fellow Afro-Surinamese to find pride and confidence in themselves.  He believed these attributes were a prerequisite to controlling their own destiny. In 1926, he put his thoughts into writing at the Koninklijke Bibliotheek (Royal Library). His book Wij Slaven van Suriname (We Slaves of Suriname), published in 1934, was the first history of black people in the colony and has been compared to W.E.B. DuBois’s classic The Souls of Black Folk.  As such, de Kom has been heralded the “W. E. DuBois of Suriname.”

De Kom’s continuing activism led him to be continually unemployed. Despite his economic circumstances, during the period of Nazi occupation in the 1940s, he supported the resistance, writing articles in the outlawed magazine De Vonk (The Spark) until he was betrayed, imprisoned by the Nazis in 1944, and sent to a concentration camp.

On April 29, 1945, de Kom died from tuberculosis in the Sandbostel concentration camp in Germany.  Today, his role in the achievement of an independent Republic of Suriname in 1954 is commemorated throughout the country with a premier university, Anton De Kom University, and street in Paramaribo named in his honor. His image is engraved on Suriname’s currency and, in the Netherlands, a statue was erected in his honor.