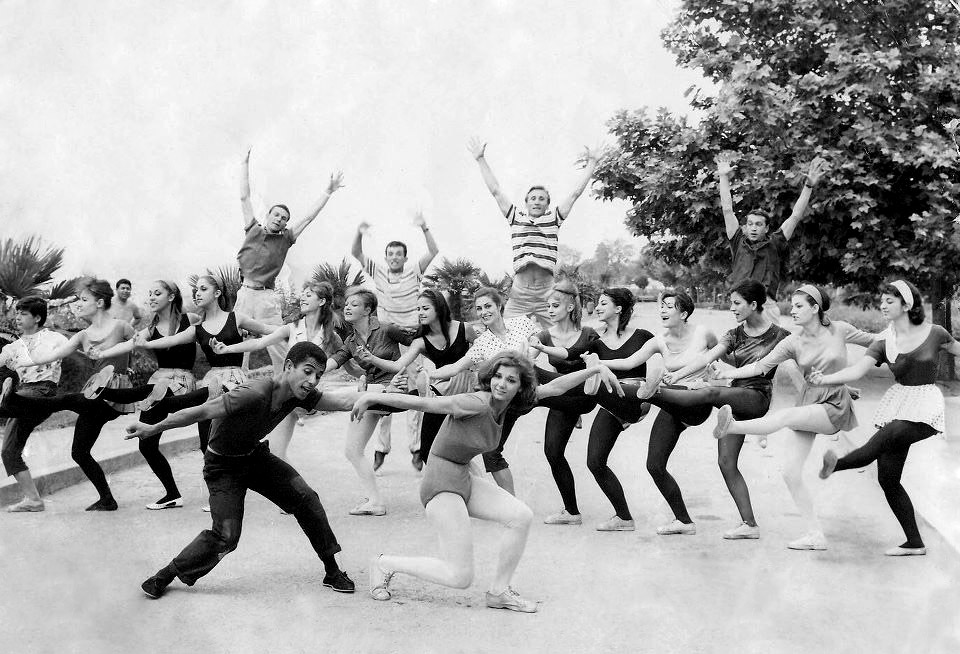 Sait Sökmen and Gülcan Tunççekiç, Kiss Me Kate, 1963
Fair use image
Afro-Turkish choreographer, dancer, instructor, and talent agent Saít Sökmen was born in Conakry, the capital city of Guinea, Africa, the sixth child of Mehmet Cemil Sökmen, a successful merchant, and Fatuma Mamady, a resident of Conakry. His father operated a bakery and winery in Conakry until political instability in the early 1950s forced the family to flee to his native Turkey where he died soon thereafter. Though the family lived in a mansion in the coastal city of Iskenderun, his mother was left nearly penniless and could not speak Turkish.  Nonetheless, still she managed to send all eight of her children to colleges and universities.

Saít Sökmen was one of the earliest graduates of Hacettepe University’s Ankara State Conservatory where he studied ballet under Dame Ninette de Valois, earned a master’s degree, and was a lead dancer. He also studied modern dance in the United States and in England at the Royal Ballet of London and Contemporary Dance School after which he became lead dancer and chief choreographer of Turkey’s national arts company, The State Opera and Ballet, from 1962 to 1970.

Sökmen’s first choreographed production The Wheel, in 1970, distinguished him as the first Turk to use modern international idioms. In 1971 Sökmen, who had a reputation for integrating elements of Turkish dance into classical ballet, founded and was head choreographer for the Contemporary Dance Group. He also owned the Swan Ballet Studio and from 1972 to 1975 taught stage movement at the Ankara State Conservatory. From 1974 to 1981, he was visiting choreographer and head choreographer for the Istanbul State Ballet. He is credited with assisting and directing such familiar productions as Porgy and Bess, Kiss Me Kate, My Fair Lady, Equus, Man of La Mancha, Fiddler on the Roof, Swan Lake, Faust, The Nutcracker, Giselle, Sleeping Beauty, and The Prince of the Pagodas. Sökmen has also worked as choreographer for literally hundreds of Turkish television shows.

In the 1980s, Sökmen was employed at the Istanbul Arts Center, the Ballet Arts and Fitness Center, and Sökmen Saitama Arts Center. In 1989 he and his wife, Gaye Sökmen, who has a background in dance and fashion, founded the Gaye Sökmen Agency, the first of its kind and premier talent agency providing new dancers, actors, and models to Turkey’s entertainment industry as well offering public relations consulting, celebrity booking, fashion shows, and media relations management. He occasionally does interviews and makes guest appearances on television.

Sökmen has been profiled in Who’s Who in Turkey. His family members, including his two sons, have had success in Turkey as professionals in architecture, sports, economics, art, jazz singing, and opera. In addition to Sökmen, of the estimated eight hundred thousand persons in Turkey (approximately 1 percent of the total population) who have varying degrees of African heritage are such notables as writer and cultural activist Mustafa Olpak, R&B singer and actor Mansur Ark, long distance runners Elvan Abeylegesse and Alemitu Bekele Degfa,; former soccer official Hadi Turkmen, international fashion model Tugçe Güder, yoga and meditation guru Mert Güler, and ballerina Sibel Sürel.