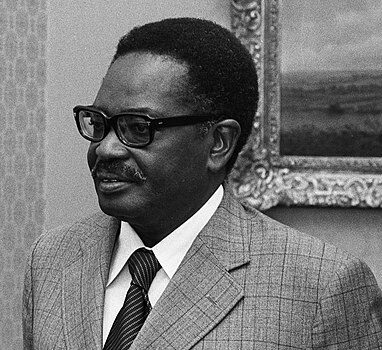 Antonio Agostinho Neto, fondly honored by Angolans as the “Father of Modern Angola” served as the first president of independent Angola. Not only was he a remarkable politician, but Neto was also a noted physician and famous poet.

Antonio Agostinho Neto was born on September 17, 1922, at Icolo e Bengo, Angola (then a Portuguese colony) to Agostinho Neto a Methodist minister, and his wife, Maria da Silva was a school teacher. Neto (who used his middle name, Agostinho), attended the prestigious Liceu Salvador Correia secondary school in Luanda, the capital of Angola. In 1947 Neto was awarded a scholarship by the Methodist Church of the United States to study medicine at the University of Lisbon in Portugal. Neto became active in several cultural organizations comprised of students from Portuguese African colonies that advocated the “rediscovering” of African culture and history. He published his first book of poems in 1948. While in Lisbon he also became active in politics, joining clandestine organizations that opposed the Portuguese dictator, Antonio Salazar. He was viewed as subversive by the government, arrested and imprisoned for several years, Amnesty International named dubbed him “Prisoner of the Year.”  In 1957 he was released from prison and allowed to continue his studies; graduating from medical school in 1958.

He returned to Angola and opened a medical clinic in Icolo d Bengo. He was a popular doctor and, also, continued his anti-colonial activities. In June 1960, he was arrested at his clinic as a result of his political activities. Local people gathered to protest Neto’s arrest. The authorities reacted with armed force – 30 protesters were killed and over 200 injured. This incident is known as the “Massacre of Icolo e Bengo.” Neto was arrested and exiled to the Portuguese colony of Cape Verde off the West African coast. He spent two years in detention before escaping to Morocco in 1962. There he became involved with other Angolan nationalists preparing to fight against Portuguese colonialism in Africa. At the end of 1962, Neto was elected President of the Popular Movement of the Liberation of Angola. He returned to Angola to lead the MPLA in the fight for Angolan independence. In Angola, three different nationalist groups emerged who fought against the Portuguese and each other. Angola was riven with fighting, destruction, and political rivalries for several years.

In 1974 the Portuguese military overthrew the dictatorship in Lisbon. The new Portuguese government opened negotiations with the African nationalists.

On November 11, 1975, Angola became independent. The MPLA controlled the center portion of the country and Luanda, the capital. Two other rebel groups controlled the northern and eastern portions of the country. Neto was proclaimed President of Angola by the MPLA. However, civil war raged for years until peace was concluded on April 4, 2002.

In 1977 the MPLA declared Angola to be a one-party state. The MPLA considered itself a Marxist-Leninist Party; pursuing socialist policies. Angola had close relations with the Soviet Union and Cuba (which sent troops to help the MPLA). Although Marxist, the MPLA had good relations with western oil companies’ revenue from which financed the national budget.

Throughout his lifetime Neto found time to write. He published several books and was honored with literary awards for his poetry and novels.

Neto was married to Maria Eugenia da Silva. They had two children: Mario Jorge Neto and Irene Alexandra. He also had a daughter, Michaela Marinova from another relationship.

Agostino Neto died on September 10, 1979, in Moscow while undergoing treatment for pancreatic cancer. He was 56 years of age.