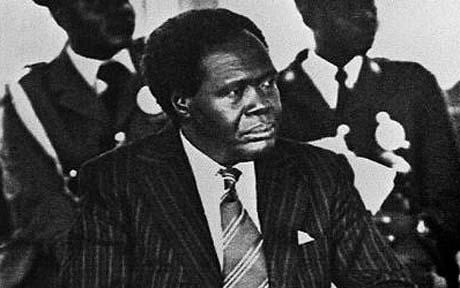 Milton Apollo Obote was the first Prime Minister and second President of Uganda. Obote was born in the village of Akoroko in Uganda on December 28, 1925. He was the third of nine children born to his parents who were farmers. Obote was from the Lango ethnic group. When Obote was born Uganda was one of several British colonies in Africa.

As a youngster, Obote attended a Protestant mission school in Lira, Uganda but later went to Gulu Secondary school in Gulu, Uganda. He attended Busoga College in Mwiri and later Makerere College in Kampala. Due to engaging in political activities at Makerere, he was expelled. He was then offered scholarships overseas, but British colonial officials prevented him from accepting those scholarships.

In 1950 Obote moved to Kenya where he worked various jobs including laborer, clerk, and salesman. While in Kenya he became acquainted with Kenyan nationalist leaders working for Kenyan independence.

In 1957 Obote returned to Uganda and joined the Uganda People’s Party. This party was composed of people opposed to the political dominance of the Buganda kingdom and the Kabaka (king) of Buganda. Another prominent party, Kabaka Yekka (King Alone) wanted to preserve the power of traditional chiefs and order in the Buganda kingdom. Obote wanted to lessen the power of the traditional rulers and create a more unitary national government.

Surprisingly, they united forces and in October 1962 Obote was elected Prime Minister. Uganda became independent on October 9, 1962, under his leadership. The alliance between Obote and Kabaka Yekka, however, was short-lived. The conflict escalated between the two groups and resulted in Obote sending troops under Idi Amin to attack Buganda. Kabaka Mutesa II fled to Britain.  For his efforts, Amin was appointed chief of the Ugandan army.

In 1966 Obote suspended the constitution and declared a state of emergency. A second constitution was written which created an executive presidency and abolished all kingdoms. This new constitution drastically curtailed the power of traditional rulers while increasing the power of the central government and Obote who now held the offices of President and Prime Minister. Many Ugandans resented this development and coupled with rumors of rampant corruption in the government, Obote became increasingly unpopular. In 1971 Idi Amin staged a coup and ousted Obote.

Obote went into exile in Tanzania. During the 1970s Amin’s rule in Uganda became despotic, corrupt, and murderous. In 1979 a group of exiled Ugandans in concert with the Tanzanian military invaded Uganda and deposed Amin. In a presidential election in 1980 Obote was elected head of state. He ruled for 5 years. He embraced socialist policies and increasingly used repressive tactics to stay in power. A guerilla war against his rule raged and in July 1985 the Ugandan Army under General Tito Okello forced him out of office. After his ouster, Obote settled in Zambia. He died while undergoing medical treatment in Johannesburg, South Africa on October 10, 2005.