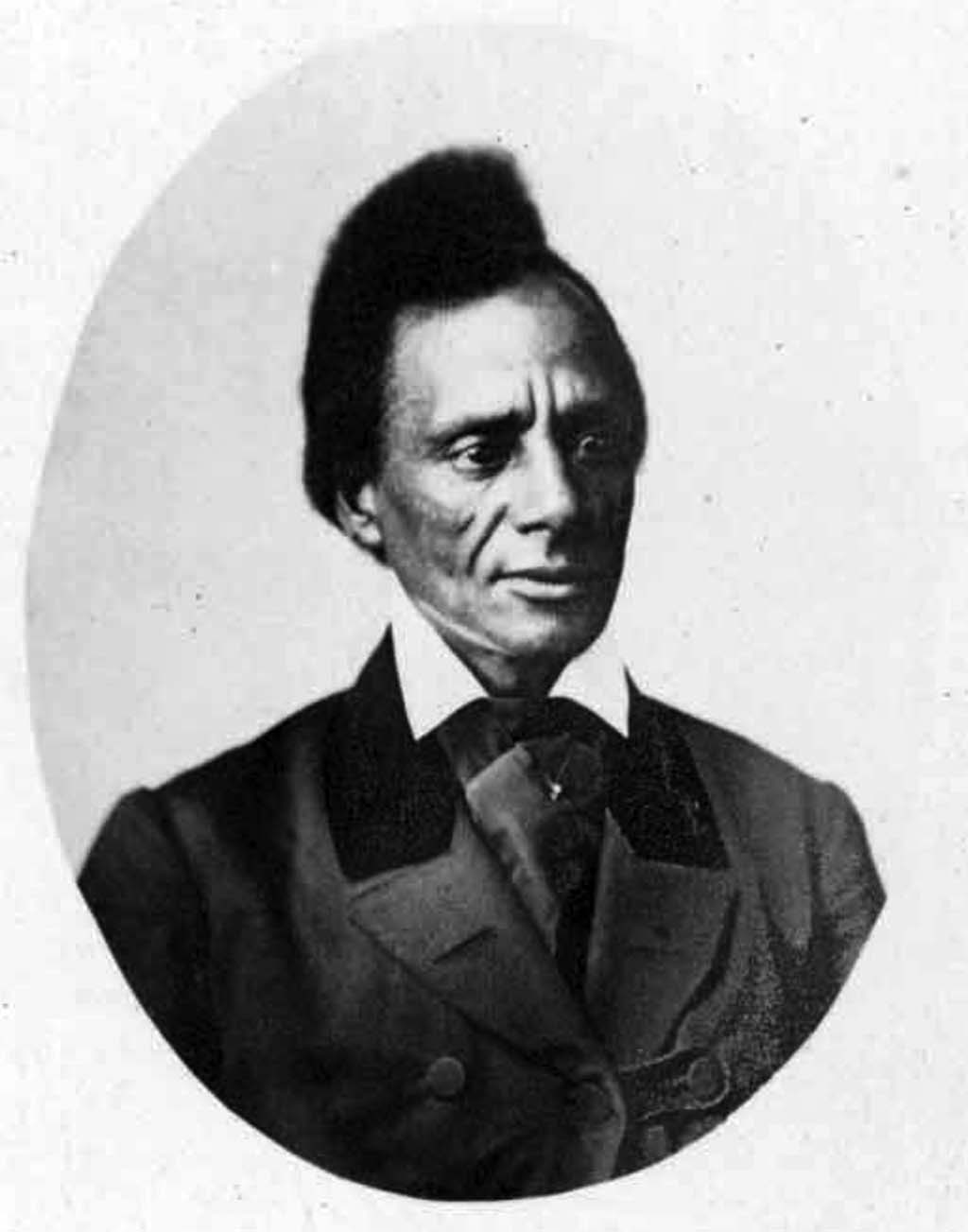 Charles Lenox Remond (1810-1878), was one of the earliest black abolitionist speakers. Born in Salem, Massachusetts to free black parents, John and Nancy Remond, Charles became an agent of the Massachusetts Anti-Slavery Society in 1838 and traveled with William Lloyd Garrison to the World Anti-Slavery Convention in London. Instead of returning immediately to the United States, Remond lectured in England, Scotland and Ireland on slavery and abolition. By the time of the Civil War Remond recruited officers for the all-black 54th Massachusetts Infantry and later worked as a clerk in the Boston Customs House. In the speech below before the British and Foreign Anti-Slavery Society in London in July, 1841, Remond describes the need for cooperation between the British and American anti-slavery movements.

In the few remarks which I propose to offer on this occasion, I shall confine myself to the merits of the resolution. I approve of it throughout, and I hope you will do the same. The friends of the colored man in America have been wont to despond; for never, while Great Britain pursues the course she does at the present time, can they hope to carry their cause to a successful termination. It is in vain to attempt the annihilation of American slavery while that system receives the encouragement now afforded to it in this country. I know that the question is a difficult and troublesome one; but, inasmuch as the antislavery party of Great Britain have been the chosen instruments of the Almighty for carrying out the great doctrine of human rights, I hope they will continue to stimulate their friends in America. If ever there was a class of the fellow inhabitants of any portion of the civilized world which deserved the cooperation of philanthropic minds in this country, it is their fellow abolitionists, comparatively few in number, in the United States.

I was one of seventeen members of the first Antislavery Society formed in America. From that time to the present I have been acquainted with all their movements,, and they have had to make larger sacrifices, and to undergo deeper sufferings, than any other class of men in the world who have associated for so noble and good an object. The foreign slave trade, to say nothing of the domestic slave trade in my own country, never flourished to such an extent as at the present moment; and we cannot hope to lessen it while it continues to be so lucrative, arising from the consumption of slave-grown cotton in this country. I cannot but regret whenever attempts are made to call away the minds of persons met for the discussion of this great question. When the British and Foreign Antislavery Society cannot stand on its own merits, then let it fall.

I need not refer to the thousands of colored people who have been driven to a premature grave by the impetus which Great Britain still gives to slavery. The system which we wish to see destroyed rolls on unheeded by recreant Americans, and, for having spoken the truth, the whole truth, and nothing but the truth, I have been stigmatized as a traitor to my country. Sooner than approve the system of slavery in the United States, if I must take the alternative of being the oppressed slave or the oppressor, give me the condition of the former. Give me the chance, if I may so express it, of being the poor slave, rather than the oppressor, when they shall meet at the bar of God, and there shall be no question of bank or antibank, tariff or antitariff. I trust that the day is not far distant when, in my own beloved country, as well as yours, mankind shall be considered great only as they are good.

At the present day, in the United States, men, women and children are enslaved for the complexion they wear. If a man there has one drop of African blood flowing in his veins, it not only dooms him to be an outlaw, but exposes him to seizure as a slave. But, if the growth of cotton in the East Indies be taken up as it ought by the British public, slavery will become the great question of the day in America, and it will soon be terminated. Liberty has a name in my country, but in practice it is completely dead. I hope the meeting will bear with me while I read one or two extracts confirmatory of the remarks I have made. I will refer to a source which has had a powerful action on a great and influential part of the District of Columbia. If a colored man goes to Columbia to attend the funeral of a deceased relative, he is liable to be seized, bound, and detained, till he proves his freedom. He must prove it while immured within the bolts and bars of a dungeon, otherwise he is sold as a slave. There are two young men being flogged as slaves whose father receives a pension for his services in the Revolutionary War.

The extract to which I refer is taken from the Natchez Free Trader, which, in copying an account of the great meeting in Manchester, England, with reference to the growth of cotton in India, says:

“It may be remembered that when Capt. Baylis, of the British East India forces, came to this city, in the early part of the last summer, for the purpose of getting men acquainted with the process of raising cotton to accompany him to India, the Free Trader was the first journal to expose and denounce his plan, as a dangerous scheme to undermine the prosperity of the American planters, and ruin the sale of their great staple. In no measured terms of rebuke, the Free Trader denounced both those wealthy and influential planters in Adams county who lent themselves to aid Capt. Baylis in his designs, and those nine young men from the States of Mississippi and Louisiana who sold themselves to the ancient and inveterate enemy of their native land; but, at that time, the acting editor of that journal knew not the whole enormity of the insidious scheme. Little, perhaps, thought those young planters and overseers, when they consented to go to India, that they were to be used as tools in the unholy hands of the abolitionists!

“Of the startling fact that the East India cotton growing Project is but a powerful organization designed to overthrow the system of domestic slavery in the American States, we have now the most ample evidence. This evidence we hasten to present to our readers; it is vitally important to the South, and merits all the attention which it will surely receive….

“The attitude of the South in sustaining the patriarchal institutions of slavery at this moment is full of interest. England is arraying its vast moral, commercial, and political power against us. The ocean queen is about to work her thirty millions of slaves and serfs in the jungles and on the plains of India, for the express purpose of rendering the labor of three millions of black slaves in America unproductive and of no value. This will be done. There is no vacillation or weakness of purpose in the English character. All India will, in a year or two, teem like a vast beehive with the cotton enterprise, cheered on by the fratricide abolitionists and mock philanthropists of the Northern States. Meanwhile, O’Connell, the Irish agitator, is invoked to agitate his countrymen against slavery on this side of the water, while, both in Ireland and England, his roaring voice is perpetually lifted up in abuse of the noble-hearted, the independent, and the fearless Southern planters, as well as the American character at large. The Kirk of Scotland thunders her anathemas against the American Presbyterians, because they will not excommunicate slaveholding church members. The Wesleyans and the Quakers are perpetually using clerical influence against the rights and peace of our social institutions. The royal consort of the Queen of England is not ashamed to preside over the opening of a meeting, vauntingly called the ‘World’s Convention,’ the chief business of which was to abuse American institutions—where Birney, once a slaveholder, and the Negro Remond, side by side on the same platform with the highest Bishops of the Church of England, and with O’Connell, lifted up their voices, traitors as they are against their own native land; all joining in full cry against a domestic institution which has come down unbroken from the ‘world’s grey fathers,’ the holy patriarchs, with whom angels walked and talked.”

I have only to add, that, if speaking before so large an audience as this on behalf of freedom constitutes me a traitor, I am proud of the appellation. I expect to return to my native country soon, and I have said nothing here which I shall not say there, and which I have not already said there again and again. I have been in danger of my life on more occasions than one, and before slavery is abolished it is probable that I shall again. I believe that there will be more martyrs to the great cause and it will then be a happy country, and England will receive the gratitude of the colored man for the efforts she has made.