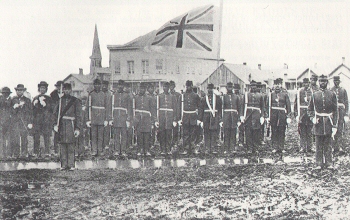 In 1859, the all-white volunteer fire department of Victoria, British Columbia refused blacks in their ranks. Therefore, some blacks volunteered their services to Governor James Douglas as a militia unit. Concerns over an imminent Indian War and a dispute between Britain and the United States over the San Juan Islands influenced Douglas to accept the offer of a volunteer militia unit that was sponsored by a prominent black merchant, Mifflin Gibbs.

The Victoria Pioneer Rifle Company (VPRC), also known as the African Rifles, was officially sworn in on July 1861 with about 50 Black men. The Royal Navy supplied drill sergeants and the volunteers built a drill house, which soon became a social centre for the black community. The corps met less than enthusiastic recognition from Governor Douglas and by 1863 it was mostly inactive. James Douglas retired as governor in 1864 and the African Rifles were not allowed to officially attend his farewell banquet. When the new Governor, Arthur Kennedy, arrived, the VPRC was again refused entry in the ceremonies. By the spring of 1865, the unit disbanded in disgust. The following is part of the reason as given by a former captain, R.H. Johnson, to the Colonist newspaper:

“… their enthusiasm and ardour as far as this colony is concerned have evaporated. This mean and scandalous manner in which they were treated upon the advent of Governor Kennedy is still fresh in their minds. Having as much human nature under their dark skins as others of a paler hue, they cannot readily forget the snubbing they received on that occasion….”

It is believed that many members of VPRC returned to the USA after the Civil War ended in 1865. Some members of the corps were: E.A. Booth (Paymaster), W. Brown, R. Caesar (Sergeant), P. Carter, A.H. Frances, R.H. Johnson (Captain), J.B. Johnson (2nd Lieutenant), A.C. Richards (Secretary), F. Richards (Captain), and S.A. Stevens (Corporal). Paris Carter, who came to British Columbia in 1856, is the only known member of the Victoria Pioneer Rifle Company to be buried in Ross Bay Cemetery, Victoria.