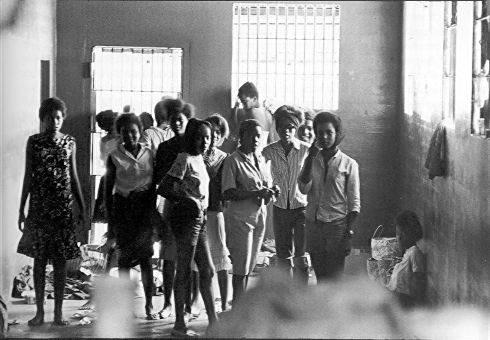 The Stolen Girls of Leesburg Stockade, 1963

Who are they:
In 1963, 200 African American youth protested segregation in downtown Americus, Georgia. Of the girls who were arrested that day, 35 were not released immediately from jail.

Why are they important to know about:
The history of the Stolen Girls represents the commitment of youth, specifically African American girls, to the larger freedom struggle of the 1960s.

Details of the life of the person:
Young people played a significant role in ending segregation in the southern U.S. In 1963, the Student Non-Violent Coordinating Committee, with the NAACP, organized a peaceful protest against segregation in downtown Americus, Georgia. Every day, the students demonstrated at the Martin Theater and the Trailways bus station. A white mob attacked them, but the police arrested the protesters.

Most of the protestors were released soon afterward but 35 girls ages ten to sixteen did not return home. Instead, they were taken to the “Leesburg Stockade” in neighboring Leesburg, GA. No one knew where they were, not even their parents.

The girls were not fed the first two days; after that, they received bad food. They had to sleep on dirty mattresses on the concrete floor, had no working toilet, and had deal with insects and even a snake that the jailers threw into their space. They were there for an entire month before anyone knew where they were. SNCC photographer Danny Lyons found them and let the community know, but not before he took some very important photographs. Lyons’s photos made their way to the Chicago Defender newspaper and the entire nation was able to see what had happened to the girls and what life was like under Jim Crow.

These Stolen Girls were held captive for two months, until the middle of September. After they were released, their parents received a bill for their captivity: they had to pay two dollars for every day their child was in jail.

Their lasting impact:
The story of the Stolen Girls is the story of the impact children and youth have had on ending racial segregation in the South.

What we learned from them:
The young people who demonstrated and, often, suffered to bring about the end of racial segregation were strong and brave. They taught the country that an unbending commitment to an ideal can bring about lasting change.