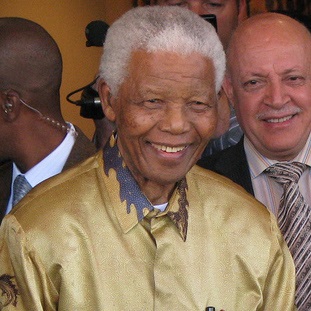 Nelson Rolihlahla Mandela was a South African anti-apartheid advocate. He became the countries first Black president and first president of post-apartheid South Africa where he served from 1994 to 1999.

Nelson Mandela fought for racial equality in apartheid South Africa and was a leader in the African National Congress. He continued to fight for true democracy, even after he was wrongly sentenced to life in prison and served over 27 years.

Details of the life of the person:

Nelson Mandela was born on July 18, 1918. He attended the University College of Fort Hare but was expelled in 1940 for organizing a boycott. Mandela joined the African National Congress (ANC) in 1940, and helped create the ANC Youth League which boycotted South Africa’s apartheid laws in 1942.

Throughout the 1950s Mandela worked to bring about change in South Africa through grassroots resistance. At the All-African Conference in Addis Abba, Ethiopia in March 1961, he spoke against apartheid and called for a new democratic constitution. In 1962 he was arrested and charged with illegally leaving South Africa and inciting strikes and was sentenced to five years. While already in prison, the government charged Mandela and the entire ANC leadership with treason and conspiracy. They were found guilty and sentenced to life in June 1964.

Mandela’s unjust imprisonment encouraged people around the world to protest apartheid in South Africa. Finally in 1990, South African President F. W. de Klerk lifted the ban on the ANC and released Mandela from prison. The two men immediately began working together for a peaceful transition to democracy and the end of apartheid. For this, they were awarded the 1993 Nobel Peace Prize. In 1994, Nelson Mandela became president and helped to end apartheid. He assigned resources to employment, housing, and basic health.

For the rest of his life, Mandela continued to be a committed philanthropist and humanitarian. Nelson Rolihlahla Mandela died on December 5, 2013, at his home in Johannesburg, South Africa. He was 95.

Nelson Mandela was important in bringing about racial equality and unity in a divided South Africa. Because of his tireless grassroots efforts both in country and around the world to end apartheid, and the many sacrifices he made, South Africa was able to transition into a more just country for its most marginalized citizens.

What we learned from them:

It is important to stand up for justice and equality no matter how hard doing so may be. Even though those who want to keep power and will do anything to hold onto it, one person can create change. Nelson Mandela showed that by fighting for what is right, you can inspire the whole world to join in the fight for good.