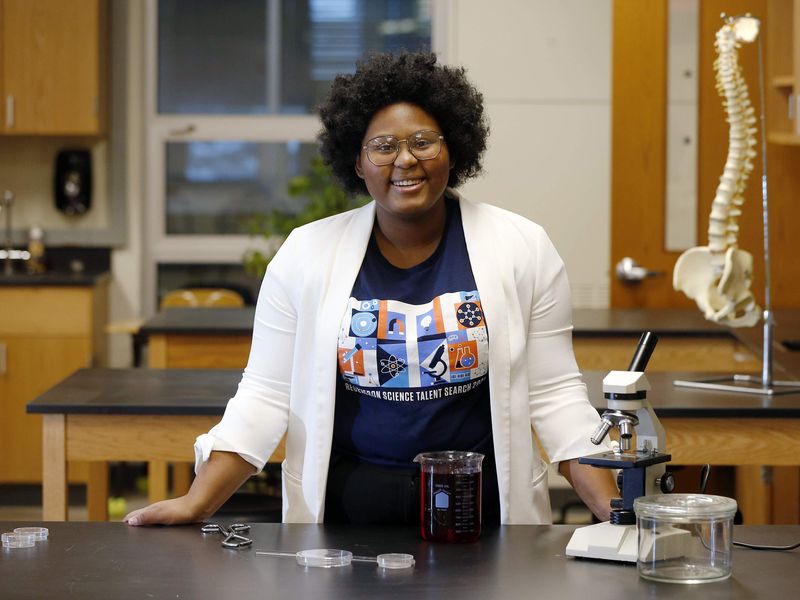 Who are they:
Dasia Taylor is a young scientist and inventor. In 2019 at 15 years old, she created surgical sutures that change color, indicating whether a patient’s wound is infected.

Why are they important to know about:
A huge advocate for racial equality, Dasia Taylor worked on a scientific experiment and eventually created a medical device technology that is more easily affordable and accessible in low-income communities and developing countries.

Details of the life of the person:
Teenage scientist and inventor Dasia Taylor was born on April 6, 2004, in Chicago, Illinois. When she was eight, her family moved to Madison, Indiana, and on to Iowa City, Iowa. She attended Creek Southeast Junior High School and graduated from Iowa City West High School in 2021.

Taylor is best known for her experiment at 15 years old where she discovered juiced beets changed color at the perfect pH point. Her discovery showed that these root vegetables could be used to provide surgical suture thread that could change color from bright red dark to dark purple to show infection in a wound. Knowing the importance of ownership, Taylor is currently working on patenting her discovery.

Unfortunately, while Taylor was engaged in this very important work, she had to deal with blatant racial discrimination. Before attending Iowa City West High, Taylor was a student at Clear Creek Amana High School in Tiffin, Iowa, where she was discouraged from joining a science competition team.

Because of this experience, Taylor has been an anti-racist curriculum advocate since 2017. In January 2021, Taylor was recognized as one of 40 finalists in the Regeneron Science Talent Search. This STEM-based event is one of the oldest and most prestigious science and math competitions for high school seniors in the United States. Taylor received $25,000 for her discovery from the local daily newspaper Iowa City Press-Citizen.

Taylor has also spent a lot of time in the Black History Game Show as its president and often attended weekly school board and district meetings. She received the Glenn T. Seaborg Award, recognizing and encouraging research and education in nuclear chemistry and radiochemistry. Because of this amazing achievement at such an early age, Taylor appeared on The Ellen DeGeneres Show.

Their lasting impact:
Dasia Taylor’s discovery of beets as a source of dye that can be used in the early detection and prevention of surgical site infections, is a significant development in medical sciences.

What we learned from them:
Taylor shows us that even in the face of blatant discrimination and naysayers, believing in yourself and working hard towards a goal for the betterment of those with limited access to life’s necessities, is a worthy goal.