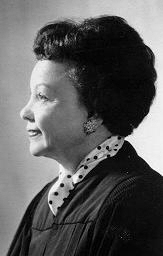 “If I had nine lives, I’d want to be a lawyer every day of every one, I enjoy it so.”  With this sensibility and love for the legal system, Juanita Kidd Stout made the correct decision in choosing her life’s work.  Juanita Kidd Stout established a reputation long before she left Oklahoma to resettle in Philadelphia and become a prominent judge.

Born an only child to educators Henry and Mary Kidd on March 7, 1919 in Wewoka, Oklahoma, Juanita learned to read at age two and remained a stellar student when she attended the segregated public schools in her hometown.  Juanita gained from the experience of having excellent black teachers and won numerous prizes at school and agricultural exhibitions for her scholarship and creativity.  At age sixteen, she left for Lincoln University in Jefferson, Missouri.  While at Lincoln, she joined Delta Sigma Theta Sorority and personally observed black attorney Charles Hamilton Houston argue Gaines v. Missouri in the state supreme court.  Later, she transferred to the University of Iowa and earned a bachelor’s degree in music in 1939.  At the time she was one of a mere 2 percent of black adults holding a four-year college degree.  Three years later, Juanita Kidd married Charles Otis Stout. By the end of the decade Juanita Kidd Stout held two law degrees from Indiana University and moved to Washington, D.C. where she became the administrative secretary to Charles Hamilton Houston.

During the early 1950s, Stout moved to Philadelphia where she practiced criminal and civil law.  In 1955, she received an appointment as assistant district attorney in the “City of Brotherly Love.”  An indefatigable worker, for three straight years she worked from 4 a.m. to 8 p.m. preparing for legal cases.  By November 1959 Stout became the first black woman elected to a judgeship in Pennsylvania.  In February 1988 Juanita Kidd Stout established another milestone, becoming the first black woman appointed to sit on Pennsylvania’s State Supreme Court.

Among her many honors, Judge Stout was an inductee into the Oklahoma Hall of Fame, a Distinguished Daughter of Pennsylvania, and was recognized by the National Association of Woman Judges as Judge of the Year in 1988.  Juanita Kidd Stout died of leukemia on August 21, 1998.