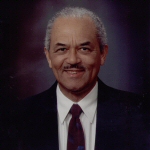 Dr. Valin G.K. Marshall was born on the Caribbean island of Carriacou, Grenada, and attended McGill University, Canada, University of Maryland, USA, and the Laboratoire d’Acarologie, Paris, France. He is a retired scientist and an adjunct faculty member at Royal Roads University, BC. His short biography is included in the contemporary directory: Who’s Who in Black Canada. In 1993, the BC Provincial Museum hosted a special Black History Event, and Dr. Marshall and others from that committee became the founding members of the BC Black History Awareness Society (BCBHAS). He was the society’s first vice-president from 1994-95, and continues to be active in BCBHAS, holding various positions on the executive and assisting in programs dealing with education and cemetery tours of BC Black pioneers.

Seraphim “Joe” Fortes was born in Barbados, West Indies. He was a seaman and came to Vancouver, British Columbia, Canada in 1885. There he worked as a barman at the Sunnyside Hotel. English Bay became his favourite spot as he loved the water and was … END_OF_DOCUMENT_TOKEN_TO_BE_REPLACED

In 1859, the all-white volunteer fire department of Victoria, British Columbia refused blacks in their ranks. Therefore, some blacks volunteered their services to Governor James Douglas as a militia unit. Concerns over an imminent Indian War and a dispute between Britain and the United States … END_OF_DOCUMENT_TOKEN_TO_BE_REPLACED