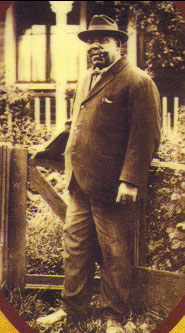 Seraphim “Joe” Fortes was born in Barbados, West Indies. He was a seaman and came to Vancouver, British Columbia, Canada in 1885. There he worked as a barman at the Sunnyside Hotel. English Bay became his favourite spot as he loved the water and was an excellent swimmer. Every day he swam in the bay, and finally he gave up his hotel job to live in a little cottage on the shore where he became a well-known lifeguard.

Joe guarded the beach kindly, but firmly, and taught the children who came there how to swim. He is credited with rescuing over 100 lives of both children and adults who ventured too far and got in trouble. For his community service, the City of Vancouver made him a special constable. When Beach Avenue was being improved, Joe’s little cottage was moved beside the bandstand at Alexandra Park, and he lived there until he died. In 1924, a memorial drinking fountain was erected facing the beach where he had served as guardian and teacher for over twenty years. He is honoured as the first English Bay lifeguard after the Park Board decided to create such a post.

Joe Fortes died of pneumonia on February 4, 1922. His funeral was conducted at Holy Rosary Cathedral where he prayed throughout his life, and he was mourned by the entire city. There is a Joe Fortes branch of the Vancouver City Library on Denman Street, near English Bay. This tribute would have pleased him greatly as the library is used daily by children. He is also remembered at the Joe Fortes Restaurant on Thurlow Street.