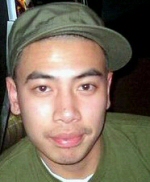 Bunthay Cheam is an undergraduate student of History at the University of Washington with academic interest in Southeast Asian studies. Born in a refugee camp in the Cambodian/Thai border, he came to the U.S. a year later in 1981 and has lived since in the South Seattle area. Bunthay expects to graduate from the University of Washington in June of 2008 with a B.A. in History. He aspires to become involved in social work for the Cambodian population of Washington State.

Best known for being the first black woman to be elected to Congress in the state of North Carolina, Eva Clayton, a Democrat, became known as a vigorous advocate for the concerns of African Americans and for social improvement. Eva Clayton was born in Savannah, … END_OF_DOCUMENT_TOKEN_TO_BE_REPLACED

A controversial and conservative Republican, Alan Lee Keyes has perhaps one of the most extensive resumes to date in public and political life. His positions and appointments include but are not limited to: U.S. Department of State Foreign Service Officer of the consular office in … END_OF_DOCUMENT_TOKEN_TO_BE_REPLACED

A writer, an economist and an advocate for affirmative action, Andrew Felton Brimmer is best known as the first African American to hold a governorship on the United States Federal Reserve Bank. Born in Newellton, Louisiana on September 13, 1926, Brimmer moved to Bremerton, Washington … END_OF_DOCUMENT_TOKEN_TO_BE_REPLACED

Born in Harlem, New York on January 23, 1935, Robert Parris Moses was an educator and an icon of the Civil Rights Movement. He was one of three children born to Gregory H. Moses, a janitor, and Louise Parris Moses, a homemaker. He graduated with … END_OF_DOCUMENT_TOKEN_TO_BE_REPLACED

Born in Little Rock, Arkansas in 1941, Ernest Gideon Green was no stranger to the Civil Rights Movement as his mother was a NAACP member and took part in protests against unequal pay between whites and blacks. Partly inspired by Dr. Martin Luther King, Jr. … END_OF_DOCUMENT_TOKEN_TO_BE_REPLACED